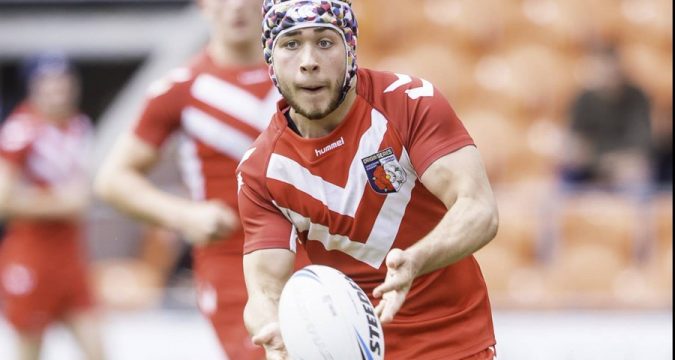 The 18-year-old joins the club on a two-year deal after representing his country last year.

He will continue his development under Ian Watson and becomes the club’s second capture of a number nine, with James Cunningham also joining the club.

“I’m just buzzing to get started,” he said.

“I’m raring to go and it’s great to be getting started at a big club like Huddersfield, the stadium is absolutely unbelievable. I’ve signed a two-year deal and my ambition is to play Super League, but first I want to prove what I can do in training and then hopefully I can play first team.

“Ian Watson is one of the best coaches in the world at the minute and it’s obvious that the club have got some big names like Aidan Sezer, I’ve watched Aidan (Sezer) play NRL and if I could play alongside him it would just be incredible.

“I’ve been on a lot of zoom calls with the academy and it’s just amazing. The set up that they have is incredible and Huddersfield is a club that gives the young lads opportunities, so it was a no brainer to sign the deal.”

Richard Thewlis, the club’s Managing Director, added: “This is another move concluded some time back which, given the academy are due to return to training at the weekend, is appropriate to announce now.

“The availability and possibility to sign any of the current England Academy squad is something that the club constantly monitors and we were delighted when George contacted us earlier in the year. His playing abilities are well known to Andy Kelly of course and Kim Williams has seen him in International action in Wales for England so for George to approach us shows a number of things in my view. Firstly, that he views Huddersfield as a club where younger players get opportunities and secondly, that having looked round and spoken to the coaches he can see how his game can develop here.”