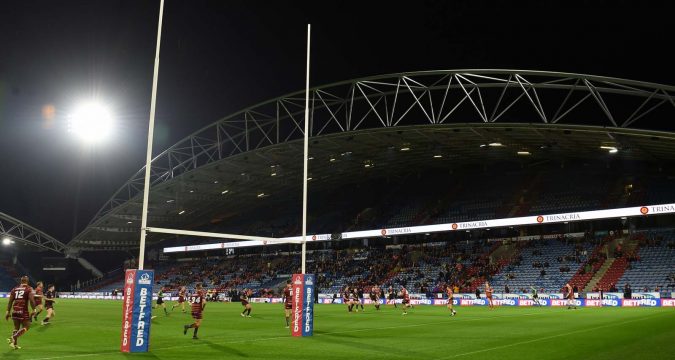 Huddersfield Giants have announced three changes to their fixture schedule caused by the postponement of their Round two clash with Leeds Rhinos.

The Giants’ home ties with Warrington, Salford and Leeds have all been rearranged for dates in April which will mean they will have to play three games in the space of just ten days.

The Warrington fixture will now be played on Saturday 18th April, 3:00pm, moved from the original date which was Sunday 19th April 3:00pm. Salford Red Devils will now travel to the John Smith’s Stadium on Thursday 23rd April 7:45pm moved from its original date of Sunday 26th April at 3:00pm. After succumbing to the wrath of Storm Ciara, the match between Huddersfield and Leeds Rhinos has been scheduled to take place on Tuesday 28th April, 7:45pm kick off.

Managing Director Richard Thewlis told the club’s official website: “This has been an incredibly tough rejig to work through and we have to thank all three clubs involved for their co-operation and understanding that this problem was not of our making and could, in reality, happen to any of us such are the vagaries of the weather patterns at this time of year.

“The solution is far from ideal for anyone but it is a solution that meets with stadium availability here, the broadcasters games already selected and the player welfare issues which surround four day turnarounds.

“From the Giants’ perspective too we have to remember that we still have a further game to schedule with Wakefield at some point due to both clubs’ involvement in the Challenge Cup fifth round when eight of our fellow Super League sides will play the scheduled round seven fixtures meaning that at that stage we will actually be two games behind most of our competitors.”