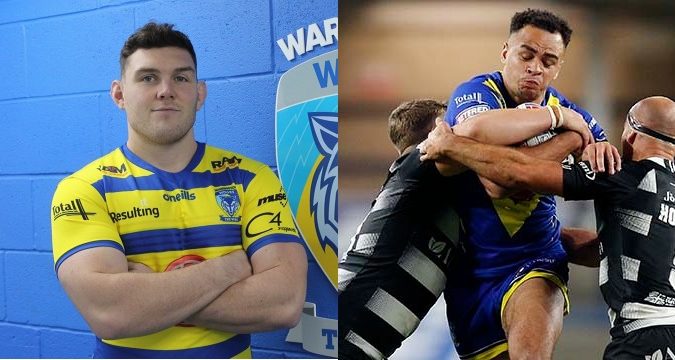 Swap deals are a rare commodity in rugby league.

There are a variety of reasons why, mainly because it can complicate matters, particularly when clubs are working under quota and salary cap restrictions. Then there’s the challenge of appeasing both players, both agents and both clubs. It can be a messy business.

But in December Warrington Wolves and Hull Kingston Rovers went in cahoots to strike a deal that saw Robbie Mulhern and Luis Johnson swap clubs.

It was a relatively straightforward deal, too. That was, in large part, down to the fact the two players share the same agent, Craig Harrison, who was the brainchild for the deal itself.

“What people probably don’t realise is how often I speak to clubs. It can be every couple of days with every club, it’s non-stop,” he told TotalRL.

“So you get an idea what both clubs are after, what they’re looking for.

“I felt both players needed a change. Luis was a bit insecure about his game-time. He’d had a meeting with Warrington about his squad number and his role, and it was miles behind where he wanted to be at his age. Then with Robbie, we spoke about certain things and we didn’t so much think it had gone stale, but his form wasn’t as great as when he broke into the England side.

“I knew Hull KR were looking for a forward who can play edge, Karl (Fitzpatrick) at Warrington was saying they want English and young, they’re changing and going for a different type of player, and I knew both players it the bill of the other club.

“KR were wanting to release some money on the cap, Rob was on more money than Luis so if they swapped salaries and went on what they were earning on their existing deals, that worked for them too and freed up some money to go towards another player. Everything fit for me and that’s when I proposed it.”

Harrison, who represents a large number of players in the British game, said the next part of the deal, persuading both the players and the clubs, was the most challenging part.

“The first reaction from a player when you talk about a move is paranoia. When I put it to Robbie the first thing he asked was whether KR had told me they wanted him to leave. Luis’ first question was asking what Warrington had said.

“But I told Robbie I thought he needed a fresh challenge, he wants to win a Grand Final and Wire are in a different place at the moment. Both of them were appreciative of the interest but concerned because they’ve enjoyed their times at the clubs. Rob won’t forget what Hull KR did for him when Leeds let him go and Luis has developed from a teenager to a man. I had to say ‘that’s life’.

“So both players said they were interested and that’s when you go to the clubs, and that’s even harder again because they fear that there’s an ulterior motive.

“I rang Karl up and said ‘Robbie Mulhern’. The first thing most clubs ask is why do the other club want to get rid of him? They’re below us in the league and they want rid. So I have to explain the circumstances and how they’re happy but a change might be better for everybody.

“I’ve got to say, Karl came back with an appraisal and I’ve never seen a better one in my life. There was so much detail, there were references from four people, a breakdown of his game, his attitude, background on his family. Once I saw that I knew they would take the deal.

“Then I spoke to Danny (McGuire), he’s known Rob since he was 16 and knew him very well and thought it was the best thing for Rob, but was also excited about what he saw in Luis.

“He was aware of those positives, he then went and spoke to Tony.

“Then it was a matter of getting permission for the coaches to meet the players and both agreed.”

The next part of the deal was straightforward, with both players agreeing to remain on the same salaries they had at their previous clubs.

At the same time, it was also the most anxious period during the process.

“You’re hoping it doesn’t break in the press because that can have a massive effect on deals. People would be amazed if they knew how much impact the media in rugby league have on things that happen behind the scenes.

“If someone knows Mulhern is available you know it can cost Wire a deal because someone might come in and offer huge money and put a massive spanner in the works. People will say as an agent, surely that’s what you want, but you also want them to get the right club and the right move.

“I know rugby league and 90% break early, once a deal gets into motion you’ve normally got about two or three days before someone has hold of it and it’s in the press.

“The paperwork wasn’t done when it broke, so then you’re shitting yourself and you’re having to do the paperwork quicker than usual and you’re trying to help the clubs keep it quiet because it’s good for their own product if they can break it first.

“It’s awful after you get a deal done, you have chairman and CEOs ringing up asking why you didn’t tell them Robbie Mulhern was available and that they’d have made an offer. But it’s not about them, it’s about the player and he felt Warrington would be the right place.

“Neither have gone for more money, it was a straight swap which is credible on both boys that they didn’t push for more money, that’s a first. They were happy to put their prospects first, which is about one in 50 deals.”

Harrison is confident that both players will fulfil their ambitions at their new clubs.

“I just didn’t feel there was a negative on this from the start. Robbie’s work ethic is good, he’s the right age and English. If that’s what they’re after they’ve got a kid that will excel.

“Luis Johnson is ready to go, he’s itching to play a run of games and grow as a player, Hull KR will give him the platform to become the player we know he is. It’s a deal that works for everyone.”