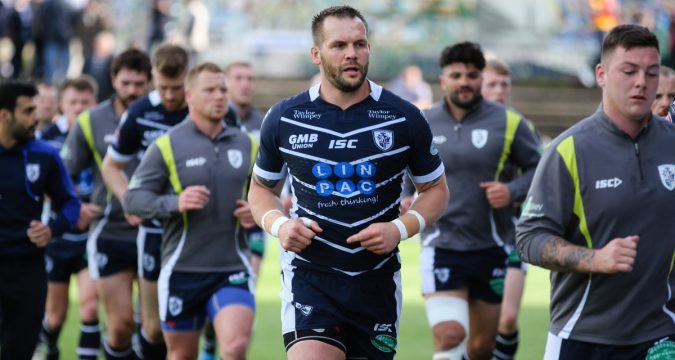 Please be aware images in this article contain words some people may find offensive.

Screenshots of alleged exchanges between former Featherstone forward Darrell Griffin and their head coach John Duffy have emerged after he was sacked for playing rugby union.

The 36-year-old was dismissed by the Championship club on Sunday after he was found to have made three unauthorised appearances for Morley RFC without written permission from the club.

However, Griffin’s brother, Hull FC star Josh, posted screenshots of two alleged exchanges between his brother and Duffy which appear to suggest the Rovers head coach had given the player permission to participate.

The alleged conversation also shows a message in which Duffy calls someone a ‘p***k’, although the identity of that person isn’t known.

I would say that’s permission don’t you ? I’m not going to let people say darrells done something wrong or that he didn’t have permission. He’s been nothing but a model professional for last 20 years and it hurts our family to see his name dragged under like this. pic.twitter.com/EbuqnibDAn

In one of the alleged exchanges, Griffin is shown to send a message saying: “Appreciate you letting me do it mate.”

It remains to be seen how the revelation will effect Griffin or Duffy moving forward. Featherstone’s squad flew to Spain yesterday to continue their pre-season training and the club has yet to comment on the alleged conversations.

On Sunday evening, Featherstone released a statement confirming the dismissal of Griffin due to a “serious breach of contract.”

General manager Davide Longo said: “A player’s contract is designed to protect both the player and the club and any breach of it, on either side, has to be taken very seriously.

“We have a zero-tolerance policy when it comes to gross misconduct. Without this, you set a dangerous precedent.

“We are undoubtedly disappointed by Darrell’s decision to play another contact sport while under contract with the club.

“RFL players’ contracts clearly state that permission to do so must be granted, in writing, by a chief executive or chairman.

“Darrell did not seek such permission and, given the club’s position and desire to achieve as much as possible in 2018, it would not have been granted under any circumstances.

“At the time of agreeing Darrell’s new contract, we made it extremely clear that he was not to play rugby union. This condition was added to his written contract, which Darrell signed in August 2017.”