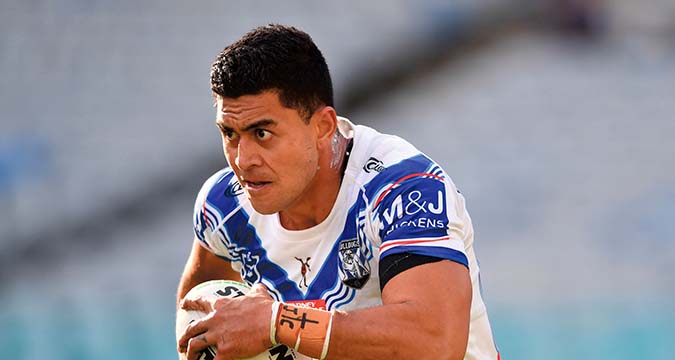 Leigh Centurions are preparing a raid on the NRL following promotion to Super League.

The Leythers were granted Super League entry last week, and the club has wasted little time attempting to bolster its squad ahead of the 2021 campaign.

League Express understands that centre is a key area the Centurions are looking to strengthen and three players have emerged on their radar.

Tim Lafai (pictured), Dean Whare and Bryson Goodwin are all players being considered by the club ahead of the new campaign.

Lafai, 29, has spent the last ten seasons in the NRL with Canterbury and St George.

A Samoa international, Lafai has made 167 NRL appearances but is off-contract and without a club.

Whare was offered to Super League clubs earlier this season, despite being under contract with the Panthers for another season.

The 30-year-old, who has made 19 appearances for New Zealand, has spent the last eight years with Penrith and made eight appearances for the club this year as the reached the NRL Grand Final.

Finally, Goodwin has been linked with a move to the club in the Australian media, with the former Warrington centre not offered a contract to stay with Cronulla.

Leigh are said to have offered him a deal, three years after Goodwin has signed for the club only to join the Wolves once the Centurions were relegated from Super League.

Elsewhere, the Centurions have converted Iain Thornley and Tom Spencer to full-time contracts.

The duo were part-time with the club, but have agreed to transition to a full-time environment following promotion.

However, the third part-time player on the clubs books, Ryan Shaw, is set to depart on loan.

Shaw will instead focus on an apprenticeship secured through the club and is now being offered to part-time clubs on a season-long loan.

The club confirmed the signing of Warrington centre Keanan Brand on a year-long deal.

The former Widnes centre had attracted interest from the club before promotion but was keen to stay in Super League. He will now do that with the club.