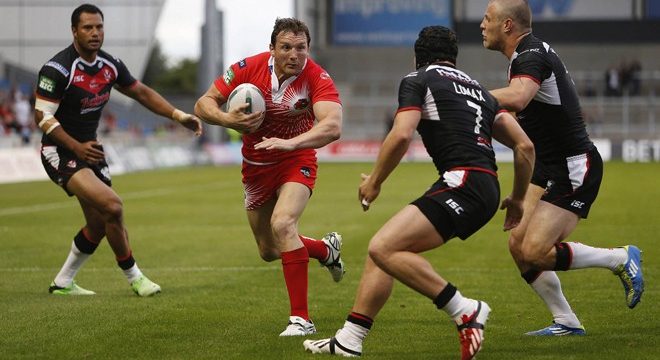 Tonight’s north-west derby is possibly the most tantalising fixture of the week. Indeed, St Helens seem to be firing on all cylinders with the introduction of superb scrum-half Luke Walsh, while Salford have 14 new players, most of whom are internationals, and are looking to reach the top of Super League for the first time ever.

What the players and coaches think

Saints boss Nathan Brown
“I think what’s happened there has been great for the game.
“This game in particular in the past could have been seen as a standard St Helens win I suppose.
“It will be good to see Tony Puletua and Francis Meli. They have no points to prove to us though. They were more than welcome to stay at the club but their budget is what it is and we have younger players coming through.
“Franny and TP served the club well and Franny in particular has left a legacy with Josh Jones, Mark Percival, Tommy Makinson and Adam Swift.”

Salford coach Brian Noble
“We’re looking forward to it. It’s got the strap line, hasn’t it, the Devil against the Saint? We’re still very new but the tough couple of games we’ve had will stand us in really good stead.
“In many people’s opinions, this is our first real test and I probably don’t disagree, with no disrespect to Wakefield and London. We’ve a heck of a lot improvement in us.
“You won’t really get a true indication of where you’re at until round 11 or 12 but we’re working feverishly hard to make sure we’re up to speed quicker than then.”

St Helens prop Alex Walmsley
“It will be a physical game. We didn’t get off to the best start against Hull but we finished the game well and that’s how we need to start against Salford. It will be a battle in the pack and we’ll get smashed about a bit with the likes of Hansen and Hock in there.
“Perhaps we fell in love with ourselves a little [against Hull]. We forgot how we got that win at Warrington – it was done by knuckling down and taking it up in the middle. We came back in the second half and did what we’re supposed to do.
“We earned the right to play and we did that but Hull were better in the first half.”

After a tight first half, St Helens put their foot down and win by 14. Luke Walsh pulls all the strings but Jonny Lomax scores twice and wins man of the match.

St Helens have won their last seven meetings (three away from home) with Salford, with the City Reds’ last victory against the Saints coming 42-34 at The Willows on 15 May, 2010.

Here’s what happened in their last 10 meetings: