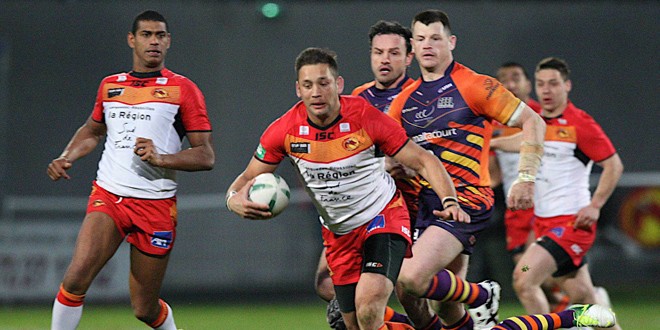 In a nutshell
On a scorching afternoon in Perpignan the Catalan Dragons were too strong for Widnes Vikings, scoring nine tries as they gave their best performance of the season.

How it unfolded
The Dragons scored two tries in the first ten minutes, through Ben Pomeroy and Elliott Whitehead, neither of which Thomas Bosc could convert.

And they extended their lead when Morgan Escaré touched down after an 80-metre move, with Bosc landing his first goal.

The Vikings then came back into the game, scoring an unconverted try by Paddy Flynn, and then a second try by Jack Owens, the latter converted by Danny Tickle.

But the Dragons asserted themselves again before half-time, when Whitehead touched down for his second try, with Leon Pryce giving the final pass and Bosc missing an easy conversion.

The Dragons kept up the pressure in the second half, with Vincent Duport scoring in the right corner, and Pomeroy scoring his second. Whitehead then scored his third try when he picked up a loose pass by Brown to Rhys Hanbury. Bosc’s goal made it 32-10 after 60 minutes, effectively ending the game.

Lloyd White gave Widnes hope, however, when he touched down in the corner from an amazing offload by Paddy Flynn, who was being pushed into touch by four defenders but was able to release the ball.

Duport and Millard scored further tries for the Dragons, with Escaré converting the first, before Jack Owens scored the final try of the game for the Vikings.

A full match report and pictures will feature in this Monday’s Rugby League Express, available in the shops and online from 11.00pm on Sunday evening, UK time.