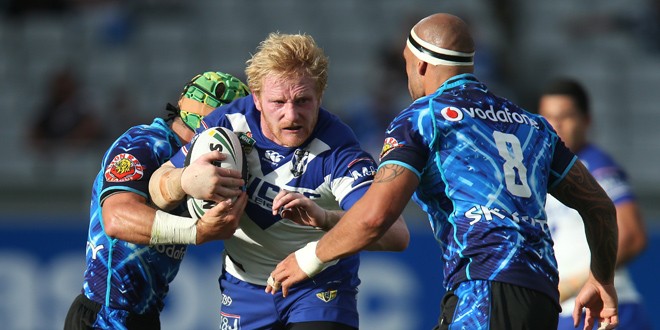 In a nutshell
The Bulldogs came from behind to snatch a late victory with a Trent Hodkinson field-goal two minutes from time to nail victory at Eden Park in front of 22,160 spectators.

How it unfolded
The Warriors opened the scoring after ten minutes with a try by Sam Tomkins, converted by Shaun Johnson, and they would lead all the way until Hodkinson’s late heartbreaker.

Manu Vatuvei extended their lead on 27 minutes with an unconverted try before Sam Perrett got the Bulldogs on the scoreboard with a try converted by Hodkinson.

Early in the second half Konrad Hurrell extended the Warriors’ lead to eight points with an unconverted try, but they couldn’t build their lead, and Tony Williams grabbed a try for the Bulldogs when taking advantage of a Vatuvei knock-on, with Hodkinson’s conversion making it 14-12.

Warriors’ captain Simon Mannering widened the gap again when he touched down Johnson’s grubber, and this time Johnson was able to add the conversion.

But Tim Lafai put the game on a knife-edge when he touched down and Hodkinson converted on 70 minutes, and then Hodkinson equalised with a penalty with five minutes to go, and the Bulldogs were able to manoeuvre themselves within range for the winning field-goal against their tiring opponents.

A full review of all the weekend’s NRL games will feature in this Monday’s Rugby League Express, available in the shops and online from 11.00pm Sunday night UK time.