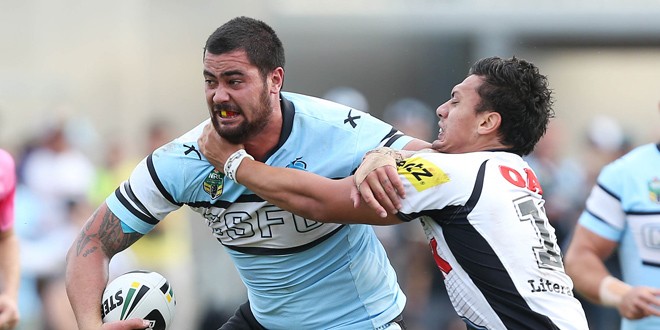 Cronulla earned a much needed victory over the Panthers at Remondis Stadium, despite losing Todd Carney with a hamstring injury, with the lead changing hands several times and the Panthers having a late try turned down by the video referee that could have won the game.

The Panthers took the lead after seven minutes through winger Josh Mansour after a ball was spilled by his opposite number Beau Ryan. Jamie Soward added the goal.

The Sharks pulled a try back when Jeff Robson got over the line, with Michael Gordon missing. Soon after that Carney had to leave the field.

The Panthers then pulled further ahead with a try by their other winger David Simmons, with Soward again adding the goal.

The Sharks replied late in the first half when Ricky Lautele took advantage of a dropped ball by James Segeyaro in a tackle from Gordon. Jeff Robson got hold of the ball and fed Leutele. Gordon added the goal.

The Sharks drew level with a penalty after 51 minutes, but the Panthers replied in kind to re-establish the two-point margin after 62 minutes.

The Sharks took the lead for the first time five minutes later, with a superb score by Gordon, who took a kick from Robson and scored under the posts, converting his own try.

The Panthers weren’t finished, however, and tok the lead again when Dean Whare created a try for Peter Wallace, with Soward again converting.

But as the game entered the final five minutes Wade Graham found some space to create a try for Robson, and Gordon added the goal.

The Panthers had a final effort when Whare got over the line, but he ws penalised for obstruction in the build-up, and the Sharks were able to play out the remaining minute of time to gain their second win of the season, although they stay at the bottom of the NRL ladder.