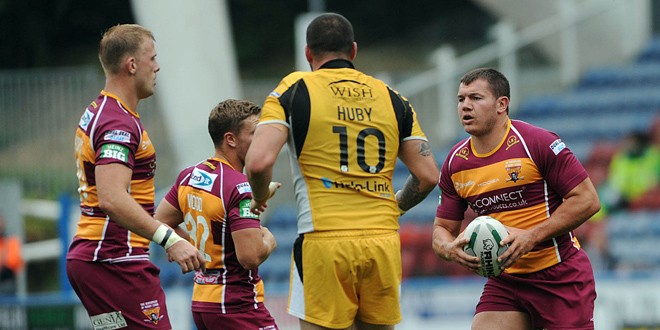 In a nutshell
A Danny Brough drop-goal was all that separated the sides.

How it unfolded
12’ – Michael Shenton opens the scoring thanks to a Grant Millington offload. The former St Helens centre fends off Leroy Cudjoe to cross the whitewash. Marc Sneyd adds the conversion: 0-6

14’ – Justin Carney – one of Super League’s most exciting wingers – scores a superb individual try, breaking through the first line of defence and racing through acres of open space. Sneyd adds the extras: 0-12

29’ – Joe Wardle gets one back for Huddersfield Giants. Danny Brough adds the extras: 6-12

36’ – Leroy Cudjoe gets a vital try late in the first half that, alongside another Brough conversion, levels the scores: 12-12

42’ – Jermaine McGillvary goes over in the corner to give the Giants the perfect start to the second half. Brough misses the conversion, though: 16-12

51’ – Scott Grix pushes the home side in front again, with Brough adding the extras: 22-16

57’ – The Giants score again through Aaron Murphy. Brough, instrumental in the try, kicks the conversion: 28-16

66’ – Jake Webster, back to fitness following a long lay-off, shows his pace to leave Scott Grix in his dust. Sneyd adds the extras: 28-22