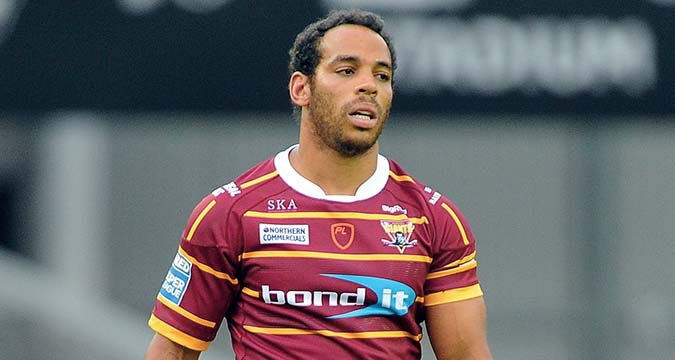 By MATTHEW SHAW and CALLUM WALKER

Leroy Cudjoe has signed a new contract with Huddersfield.

After reaching a landmark 300th career appearance on Friday, the centre has signed a new one-year deal with his boyhood club.

Cudjoe, a one-club man throughout his career, has impressed since returning from two serious knee injuries.

The 32-year-old has played ten games since his return, scoring twice and impressing throughout.

He has been rewarded with a new contract as a result, extending his stay with the club into a 14th season.

“The only real issue ever surrounding Leroy has been the frustrating and difficult period we and he had during his spell out with injury,” said the club’s Managing Director, Richard Thewlis.

“It was made clear to Leroy that if he could get back playing week in, week out, then of course there was a place for him next year in the squad.

“He has done that through sheer hard work and bloody-mindedness and everyone here is delighted that he is here for at least another year.

“Luke Robinson paid tribute to him last week as he approached a career appearance milestone and I’d echo all of what he said again in that Leroy is a superb role model for everyone at Huddersfield to follow and support and its wonderful to see him playing again in the claret and gold.”

Having joined the Huddersfield Academy as a 16-year-old from local amateur side Newsome Panthers, Cudjoe first earned a full-time contract at the end of the 2006 season.

After impressing as a youngster, the centre went on to make his debut for the first team in 2008, and has since gone on to make 288 of his 300 career appearances for the Giants.

For the past few seasons, however, injuries to his knee have affected his time spent on the field. But Cudjoe has responded in 2020, quickly re-establishing himself as one of the top centres in the game, which his coach was eager to stress.

“He’s had a really tough run over the last two years – no one has been as frustrated as him,” said Robinson.

“But Leroy is the epitome of what we want to create at Huddersfield; we want players that genuinely care about the club and their team-mates and he does just that.

“The All Blacks talk about leaving the jersey in a better position than when they gained it and he is testament to that.

“He is the bloke that always comes to every Scholarship game and Academy game. He knows every young lad within Huddersfield and coaches Moldgreen Under-14s.

“He really does invest into the club and he is someone who I really respect and appreciated playing with and the boys who play with him now are the same.

“He’s great around the young kids; as players get older, they can get a little bitter.

“I’ve seen it before where older players start getting a little worried about the next generation of players coming through that are snapping at their heels to take their spot.

“But Leroy’s not like that. He’s really good and is always wanting to improve everyone around him. He’s been a great servant to the club.”