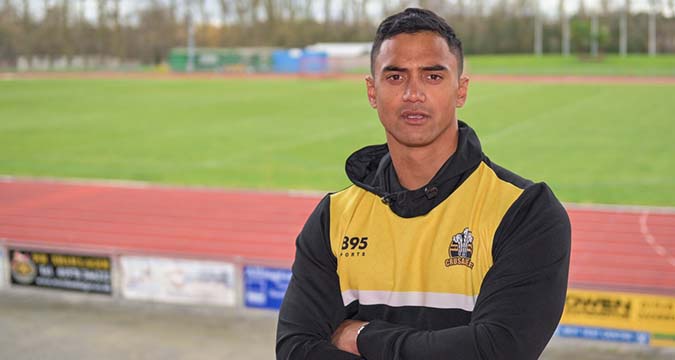 Anyone in Rugby League needing a story of resilience to lift spirits, Tyme Nikau can provide you with exactly that.

The surname might ring familiar to those of Castleford Tigers or Warrington Wolves allegiance, with Nikau being the son of former New Zealand bruiser Tawera, whose relentless tackling can still be evidenced by the bruises on those who played against him.

Tyme was looking to, in a very literal sense, follow in his father’s footsteps to the UK by moving to North Wales Crusaders at the start of this month. At least, that was his intentions.

He trained only once with his new teammates and was eager for a first outing against Barrow Raiders. That was, when Coronavirus struck.

“I was really eager to get my first hit out,” he told Rugby League World. “There’s bigger things in life now, though, and that’s understandable.

“We didn’t even get chance to settle, we were here a week then this all kicked off. We’re just staying with some family friends in York at the moment. We moved here to start with and we were going through the process of sorting out where we would be living with the club.

“We told the club our friends were happy to keep us up and we’d sort it out after. We couldn’t have asked for too much more from the club, really. They’ve been checking up on us frequently and have been great through all of this.

“I came over with my wife and we’re pretty self-sufficient. We just told the club there’s more to worry about than just us, at the minute.

“We told them to look after the players and their families, first, we’re alright as we are and we’re well looked after. I’m really grateful for the move and I’m still very keen to get involved when play resumes.”

When he finally gets to make his debut for North Wales, Nikau will add another side in a career in a road well-travelled. He started out as a junior with Warrington-based Rylands Sharks, while his dad was at the Wolves, featuring for the U9s, before moving back to New Zealand.

“When we moved away, the club sent over a framed jersey and a team photo that’s still hanging up in my dad’s house,” Nikau remembers. “You’ve got all the representative jerseys and then a Rylands Sharks one, they have a special place for us.

“I always dreamed of Super League as much as the NRL, when I was a kid. When I was younger I just wanted to push the level that my old man’s been.”

Nikau’s push for the top saw him feature for the development sides of both Melbourne Storm and New Zealand Warriors, before moving to Newcastle to play for Maitland Pickers.

Despite his own admission that, upon returning to Australia, he scarcely harboured ambitions to play at a top level, he would eventually feature for Newcastle Knights’ reserves.

Nikau then featured Burri Burri Bulldogs in the Newcastle Rugby League division, before a honeymoon with his wife in the UK had him pondering a move back to British shores.

“I hadn’t been back to the UK since the Commonwealth Games with my dad, in 2006,” he remembers. “I came over with my wife and I really loved it here, so I initiated the move with North Wales Crusaders. I’m really grateful they gave me the opportunity.

“I’m grateful for all the opportunities I’ve had in the sport. I didn’t get much game time at Melbourne, but it was great to be involved there. It was a real learning curve for me, I was taking the game quite casually in New Zealand but you have to really up your game in Australia.

“I took that back to the Warriors and when I came back to Newcastle, it was more to do with joinery and work. I played at amateur level, first, then I got drafted into the Knights’ system and made it all the way to reserve grade. I went over on a whim and realised quite quickly I could take my chances through hard work.”

Clearly grit and determination is an inherited trait for Nikau, with his father’s career seeing him move to the UK with York Wasps and Sheffield Eagles, carving his way to feature for Castleford and Warrington either side of a spell in the NRL.

But while Nikau admits he is keen to draw few comparisons to his career, citing different age and motivation for the move, he holds his father in the highest of regards.

Difficulties have certainly come aplenty for the current New Zealand board member and motivational speaker, with the tragic suicide of his wife and Nikau’s mother Letitia in 2001, followed by the amputation of his leg after a motorcycle accident in 2003.

“I looked up to my father a lot and aspired to be up there with him,” he says. “I think he showed you can come over to the UK and work hard. When you’re a bit younger you don’t tend to recognise those traits, I’ve just been married and I’ve really grown up now.

“Looking back, it’s massive what’s been able to achieve on-and-off the field with all the struggles that he’s had in life. He’s certainly a man to look up to and I hold him in high regard, I’ve got a lot of respect for him.”

Clearly the resilience getting Tyme and his wife through the current Coronavirus circumstances is one thing he does have in common with his father.