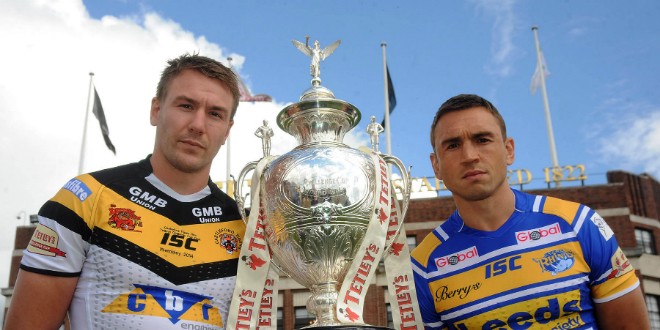 It’s been described as the most anticipated Challenge Cup Final since the showpiece event returned to Wembley – and for either Castleford Tigers or Leeds Rhinos, Saturday will provide the culmination of a fantastic and enthralling Rugby League tale.

Both Castleford and Leeds’ journey to the Wembley final is the stuff of Hans Christian Andersen-type writing, such is their fairytale attraction. And for once, any self-obsessed Rugby League neutral should withdraw their allegiance for one particular side – because whoever wins the Challenge Cup, there is a great story to be told.

Take Castleford, for example. Their story is remarkably shorter than Leeds’ – in fact, it’s almost a brief biopic compared to the ‘War and Peace’ type tale of the Rhinos. But it’s equally as captivating, and arguably more romantic. Dwelling in the lower echelons of Super League for a number of years, the work Daryl Powell has done to transform Castleford from relegation fodder into genuine championship-winning material is nothing short of sensational.

Kevin Sinfield openly admitted this week to TotalRL.com that Powell should be coach of the year – there aren’t many who would argue with that.

Winning the Cup for the first time since 1986 would – some would argue – be no less than Castleford deserve. They’ve almost encapsulated the heart of every Rugby League fan this season; not just with the wins they’ve recorded, but the way they’ve gone about their business on and off the field. The tag of ‘Classy Cas’ has been lost on them over the last few years – but not anymore.

And if chairman Jack Fulton does lead them out as planned on Saturday, there are sure to be a few emotional tears being shed. If they win it, that small town with a population of less than 40,000 will be sent into meltdown come 5pm Saturday – if there’s anyone there, that is.

But then there is Castleford’s bigger, and arguably more famous, neighbour to factor into the equation. This isn’t just any old final for the Leeds Rhinos. This is the desperate bid to stop the most infamous losing streak in Challenge Cup history continuing for at least another year. They didn’t make it to Wembley last year, but defeats in 2010, 2011 and 2012 will be tough to take for a side who have become perennial winners over the last ten years or so.

The mood in the Leeds camp is relaxed – but the intentions are very serious. And should Leeds finally get their hands on the Challenge Cup for the first time this century, it will be fitting to see the likes of Kevin Sinfield, Danny McGuire and Rob Burrow lift the famous old cup. Sinfield continuously refuses to answer the question when asked, but his career would have to be regarded as incomplete without a cup glory to his name. Leeds’ Challenge Cup story is one of pain, anguish and heartache – but those six defeats since 1999 will be quickly forgotten if they are the victors at Wembley tomorrow.

This isn’t just any old Challenge Cup Final. This is a local derby, with huge bragging rights at stake between two sides that have given us a pair of fantastic games already in 2014. And no matter who wins, there will be a fantastic final chapter written in the most incredible of Rugby League stories. The excitement and anticipation for the final is so high that hardly anyone has mentioned Kevin Sinfield and Luke Dorn stepping out onto the same field once again – which is how it should be. Sinfield is afforded that moment of madness in an unblemished career, and the affluent Dorn has put it to bed like a consummate professional.

If you’re a Rugby League fan, you should be wishing the hours away until kick-off. The prospect of a packed-out Wembley Stadium is mouthwatering, and Rugby League is going to put on one hell of a show for the watching world. Whether you’re watching the game at Wembley, in a pub or even just sat at home – sit back and enjoy it. You might not see a Cup Final like it again for quite some time.