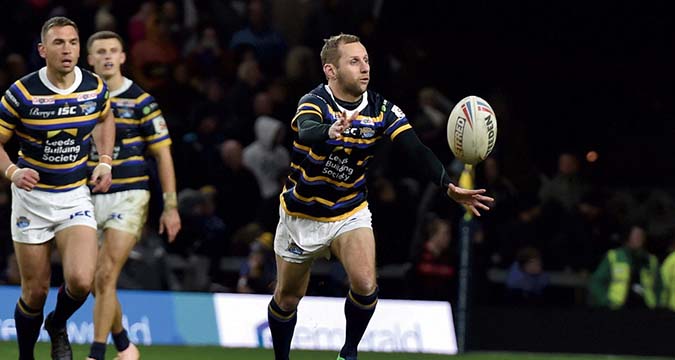 Rob Burrow will be the RFL’s chief guest ‘in absentia’ for the Challenge Cup.

Burrow, who was the subject of a documentary on the BBC this Tuesday, has received worldwide support as he battles the illness.

RFL Chair, Simon Johnson, said: “Had the Coral Challenge Cup Final taken place in July as planned, Rob would have joined us as the guest of honour.

“Circumstances have changed, but Rob remains the 2020 Coral Challenge Cup Chief Guest – central to the day and in all our hearts as he and the rest of the Rugby League community this year watch the final from home.

“Rob Burrow represents the best of the sport. An inspirational player, a dedicated father, husband and son, and now an inspiration as a campaigner, Rob is beloved by everyone in Rugby League and by many, many friends of our sport.

“For this highly unusual Challenge Cup Final – with no supporters in the ground, and no traditional presentation of the trophy – we are delighted that he accepted our invitation to be Chief Guest in absentia.

“Rob has chosen to use this platform to say ‘thank you’ again to the Rugby League community for its support to him and his family, and to further raise awareness of MND on behalf of those living with the disease who do not have a public profile.

“Together with the MND Association and Rob, a simple text-to-give service has been set up in honour of our Chief Guest to enable all of us in the Rugby League Community and beyond to further show our love and support over the Coral Challenge Cup Final weekend. And raise much needed funds for the MND Association.

“Every Challenge Cup Final has a Chief Guest who is special to the sport and in this year it is the sport’s very great honour that this is Rob Burrow.”