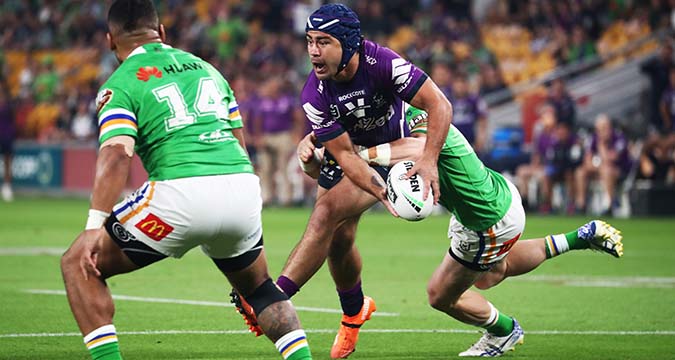 Melbourne Storm are back in the Grand Final, after missing out last year, as a crushing opening to the game helped them comfortably see off Canberra Raiders 30-10.

The Storm scored four tries early on to burn out to a 24-point lead and while the Raiders stabilised, the game was over very early on.

Melbourne stormed out to their huge lead with four tries in the opening 25 minutes. Jesse Bromwich crashed over for the first before Josh Addo-Carr’s break set up Ryan Papenhuyzen. Suliasi Vunivalu’s brilliant solo effort got their third before Justin Olam capitalised when Nick Cotric failed to deal with Papenhuyzen’s grubber.

Canberra responded before the break to close the gap to 18. Cotric made up for his earlier error by grabbing George Williams’ high kick and beating Addo-Carr to the line.

The Raiders came out with intent in the second half, pushing Dale Finucane back into his own in goal off the kick off but a dropped ball crushed their early momentum and after 23 minutes, the Storm broke through as Finucane muscled his way over after a knock back from Vunivalu.

The Raiders scored a consolation through Cotric’s second but in the end, their slow start cost them a position in the Grand Final.