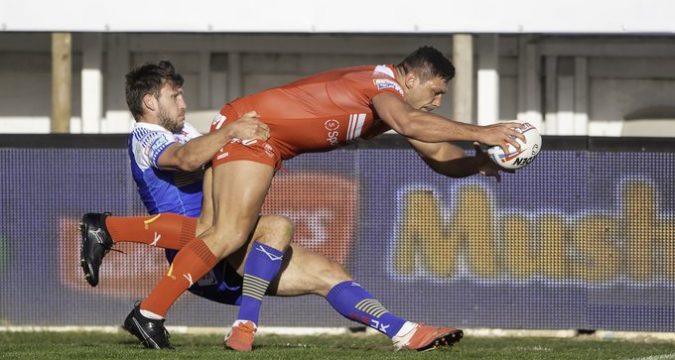 Hull Kingston Rovers gave their best performance of the season tonight, beating Leeds Rhinos 26-6 thanks to a hat-trick of Tries from Kane Linnett.

The Robins came into the game wanting to build on their narrow victory over Huddersfield Giants a week earlier. They were without the suspended Mikey Lewis and the injured Korbin Sims, but they were able to welcome Brad Takairangi for his club debut.

The Rhinos had lost their last three games, but they came into the game strengthened by the inclusion of Konrad Hurrell, Ash Handley, Richie Myler and King Vuniyayawa, all of whom had recovered from injury.

The Robins took the lead on ten minutes, when Ryan Hall scored his 200th Super League try, when he touched down a Jordan Abdull kick, with Abdull failing to convert.

Matt Parcell then scored from close range and Kane Linnett added a third try, also touching down an Abdull kick, with the halfback converting both tries for a 16-0 lead on 25 minutes.

But the Rhinos struck back when Brad Dwyer scored a trademark dummy-half try and Ash Handley converted.

Linnett scored two more trie in the second half and the Rhinos were handicapped by the sinbinning of Richie Myler for dissent, as the Robins cruised to a convincing victory.