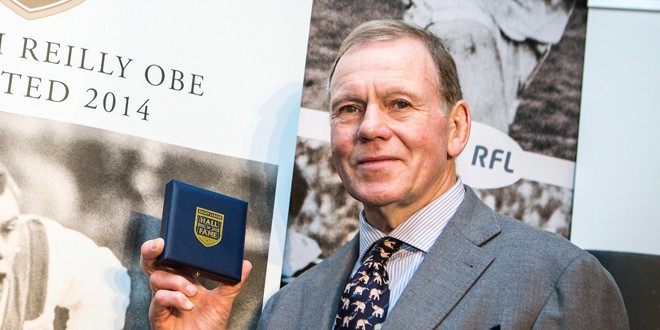 Malcolm Reilly was not just one of the great rugby players of all time, he was one of the toughest. His hard-man reputation preceded him in a career that saw him win showpiece finals with Castleford and Manly. He moved into coaching, winning the Challenge Cup with Castleford in 1986 and the Grand Final with Newcastle Knights in 1997. In between, he coached Great Britain to series wins over New Zealand and came agonisingly close to winning Ashes and World Cup triumphs in 1990 and 1992. Reilly is an OBE and a member of the British Rugby League Hall of Fame.

RR: What was it like coming into the Castleford team as a teenager?
MR: I started at Cas when I was working at a local colliery. I’d been playing soccer, but one day the bus didn’t turn up, so I got on the rugby bus. After eight games, they signed me on. One early memory I have was beating the 1967 Kangaroos 22-3. I vividly remember coming up against Arthur Beetson. I didn’t realise shirts stretched a metre and a half! He grabbed me and drew his fist back and I took two paces backwards – a wise thing to do! Two years later, I won the Lance Todd at Wembley. I was lucky to play though, because I’d been in bed with ‘flu the day before.

RR: Which of your coaches do you have the fondest memories of?
MR: Johnny Whiteley was coach of the successful 1970 touring party, so he is right up there. He was outstanding. Derek Turner at Castleford toughened me up as a player. I quickly realised that I would rather be on the field doing some damage to opponents than in the changing room with Derek doing some damage to me. Tommy Smales was also a big influence. As well as coaches, I’d mention my schoolteacher Roy Close at Ashton Road Secondary Modern. And at Manly, there was Ken Arthurson, who was the secretary-manager. He really looked after me over there.

RR: All your Great Britain caps came in 1970, the year we last won the Ashes.
MR: We lost the first Test miserably at Lang Park and Johnny would probably say he picked the wrong side. We’d played some ordinary teams, so some of the players who were selected weren’t up to it when the tough stuff came around. But in Dennis Hartley, Tony Fisher and Cliff Watson, we had a great front row. Doug Laughton was in the second row. He’d said to me on the plane, “How do you think you’ll enjoy playing in the second row?” But in the end, it was Doug who played there, with me in the loose-forward role we had competed for. Roger [Millward] was the standout player and with him in great form, we won the second and third Test matches.

RR: You had some legal issues on the tour, didn’t you?
MR: Yes, but I was provoked on both occasions. I was young and raw and didn’t like being called a Pommy bastard. After the first incident, we got wind that someone was trying to serve me a writ in Queensland and, had they successfully done so, I wouldn’t have been able to go to Sydney. So the players used to make a tunnel for me pitchside so nobody could serve me with the papers. They also tried to get me at the airport. I managed to get on the plane and then an announcement came up before take-off, “Would Mr Reilly please press his call button, we have a lady here who wishes to speak to him.” We all knew what it was about, so every other player pressed their light. She shook her head and left the plane, but they eventually got me in Sydney.

RR: Did you experience much ‘Pommy-bashing’ when you first played for Manly?
MR: Yes, but I think that’s what made me mentally tough. I knew they didn’t like Pommies. I remember asking team-mate Peter Peters each week who was the toughest player we were facing, because if I could take one of the tougher players, then people would have a bit of respect for me. The game was brutal then. You could express yourself physically, but you had to be mentally prepared.

RR: How were you treated by the media?
MR: I had a very good relationship with most, but they used to highlight aspects of my play. I had problems with one journalist and when my son was born, the Mirror’s headline was something like “Baby Boy Born to the Monster!”

RR: Knee injuries affected most of your career. How are they now?
MR: They’re titanium now and they’re great! I’ve been to the gym this morning. I don’t do much cardio but they’re fine for what I do.

RR: How did you find being a player-coach when you returned to Castleford?
MR: It was great because while I was on the field, I could ensure the game plan went as intended. Plenty of coaches today must wish they were out there, rather than firing instructions into a walkie-talkie. One of my last games saw Peter Sterling accuse me of eye-gouging, but I didn’t intentionally do anything. He made an issue of it, as did a newspaper, so I took it to court. You couldn’t see anything incriminating in the video, so I was cleared. But we made up. He was a tremendous player.

RR: You also coached Leeds and Halifax before you went back to Australia. How did they compare?
MR: I enjoyed the first season [1988-89] at Leeds but two games into the following season, I resigned. The directors were having too much influence. I didn’t need that. I was also coaching Great Britain and working for a brewery, so I had three jobs. There were nice people at Leeds and the chairman was a cracking guy. I enjoyed Halifax. It was a challenge, but the players could walk away after games and be proud of what they’d achieved.

RR: You came so close to winning the Ashes and the World Cup with Great Britain.
MR: We did, but you just have to live with the fact that we came up short. I was lucky that we had so many great players and in Maurice Lindsay, I had a very supportive manager. But the game in Australia is almost the national sport and they had plenty of high-quality players themselves.

RR: You coached arguably the greatest British footballer, Ellery Hanley, and perhaps the best Australian player, Andrew Johns. Both were complex characters. How did you deal with them?
MR: Ellery was a fantastic player, but I actually fell out with him because he took advantage of a situation and it shouldn’t have happened. He didn’t smoke or drink, but I once had to send him home, as an example because you had to have discipline in your squad. Andrew was a very complex player, very gifted. He had a lot of bad habits. He was a bit wild. Discipline left a bit to be desired. I knew if I gave him a dressing down all the time it wouldn’t work. So I would get his brother Matthew and Paul Harragon to look after him. He was such a natural footballer. He had a football brain and a great kicking game – the complete package. I couldn’t be at loggerheads with the best player. I had to get the best out of him.

RR: How did the Newcastle Knights players take to you, given that you criticised their fitness levels as soon as you started there?
MR: In the first training session they left a lot to be desired, so I pulled them into the office one by one and went through my expectations. I knew if they were going to do anything, they had to improve. I got onside with the right people – people like the Chief [Harragon]. He gave his best all the time, although there were some who didn’t. But we went on to win the Grand Final in 1997. Manly had about seven internationals and were an amazing side. We only had a couple. We were massive underdogs, but I knew if we could play at our best, we could shock them, and we turned it around and beat them 22-16.

RR: You came home to coach Huddersfield. Why didn’t it work out for you there?
MR: I thought I was bulletproof and that I could buy a few players and turn it around. But the depth and quality weren’t there. I’m a bad loser and didn’t get on with some of the directors. Good players make good coaches, but they weren’t up to playing in Super League. I thought I could turn them around but couldn’t find the right people.

RR: You were calling for British Rugby League to switch to summer as far back as 1976. Have you been vindicated?
MR: Rugby League needs to be played on a good surface. You don’t want to be wading through muddy and wet fields. I played in winter when they scraped the snow off the field and it was rock hard. Summer football is much better.

RR: What would you change about the modern game?
MR: The ten-metre rule would be the first thing! At the time I was concerned that Australia were playing to ten metres and were much fitter. We had a skinny five, but we had good offensive football. With the ten, the defence has to slow the attacking team with wrestling, so there are three in the tackle. It’s all about slowing the ruck. You didn‘t need to wrestle with the five-metre rule.