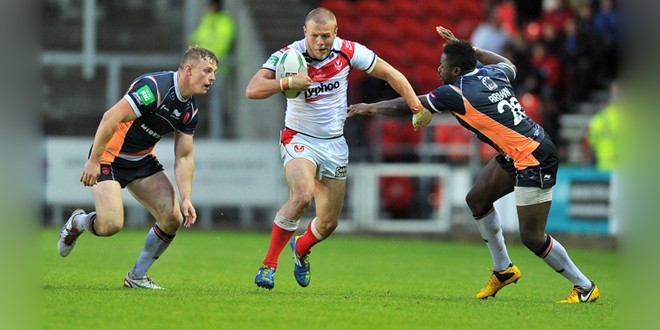 In a Nutshell
St Helens and Hull KR were level at half-time, but four tries in a ten-minute spell in the second half meant that Saints eventually coasted to a convincing victory over an injury-hit Hull KR.

How it unfolded
St Helens gave a debut to their giant new signing Mose Masoe off the bench in tonight’s Langtree Park clash against Hull Kingston Rovers, and the Samoan star helped his new team to a convincing 38-18 victory to retain their 100 per cent record at the top of the Super League table.

Early on it looked as though it was going to be a one-sided stroll in the park for Saints, with tries in the first five minutes for Adam Swift and Jonny Lomax, both converted by Luke Walsh.

The Robins took some time to find their feet, but in the final ten minutes of the half they struck back with tries by Frenchman Kevin Larroyer and Greg Eden, both of them goaled by Travis Burns, to put the sides on level terms going into the break.

But then St Helens struck with quickfire tries by Walmsley, Swift, Soliola and Makinson, with Walsh converting two of them, and then adding another goal to Jon Wilkin’s try after 67 minutes.

The Robins scored a late consolation try from Josh Hodgson, goaled by Burns, who was sinbinned for a professional foul in the closing stages of the game.

But of more concern to Hull KR coach Craig Sandercock will be injuries to Craig Hall (suspected ruptured testicle), Graeme Horne (shoulder) and Rhys Lovegrove (tricep) as the Robins, with only one point from their first four matches, look for a change of fortune.

St Helens, on the other hand, continue to impress and scored 38 points for the third time in four matches this season.