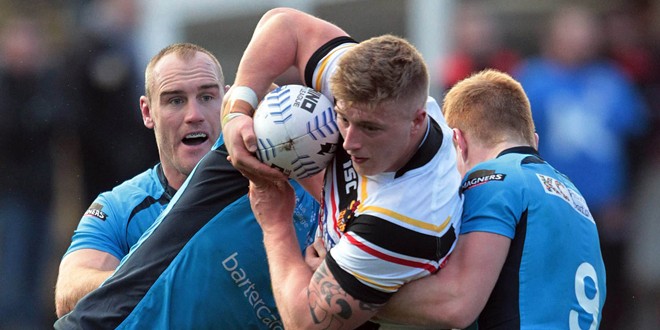 In a Nutshell
Hull FC built up a commanding 32-10 half-time lead, but the Bulls stemmed the tide in the second half for a final scoreline of 44-16

How it unfolded
Bradford Bulls gave debuts to loan players Ryan Sutcliffe from Leeds and Greg Burke from Wigan, but they were unable to make much impression on Hull, even though they took an early lead through captain Matt Diskin.

Hull had too much firepower for a Bulls side weakened by some recent departures and they replied to the Bulls’ early score with six first-half tries from Gareth Ellis, Joe Westerman, Shaul, Richard Whiting, Aaron Heremaia and Danny Houghton, with Whiting converting four. The Bulls had scored a second try through Adrian Purtell, but, down by 22 points, they were facing a mountain to climb in the second half.

Shaul and Rankin added further tries for Hull, both converted by Whiting, but the Bulls hit back with a late consolation try from Adam Henry, converted by Jamie Foster, to add some respectability to the scoreline in front of a crowd of 11,307.

After this result the Bulls are still at the foot of the table with minus two points.

It was Hull’s second victory of the season, but their joy was soured by a late leg injury to winger Tom Lineham, who had to be helped off the pitch.

A full report of today’s game with pictures will feature in Monday’s issue of Rugby League Express.