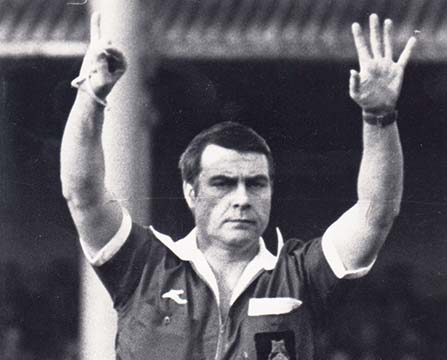 Debating refereeing performances and the decisions they make will always be a big part of Rugby League.

But no one can dispute that we have lost not just one of the game’s best-ever officials, but also one of its greatest characters, with the death of Billy Thompson, who I got to know during my time at his hometown club Huddersfield and whose after-dinner speaking I enjoyed at many events down the years.

Out on the pitch, Billy’s long and illustrious career, which included a World Cup Final and three Challenge Cup Finals, was ending as mine was beginning, and we overlapped by a season, 1983-84, when he was in the middle for a number of Hull games I played in.

I remember him taking charge of the Yorkshire Cup Final, in which we beat Castleford 13-2 at Elland Road.

I was young and enthusiastic, sometimes a bit too enthusiastic, and I recall Billy pulling me to one side. There were no theatrics, no public display of ‘I’m the boss and you listen to me’, just a quiet warning that I was pushing my luck and that if I carried on, there would be repercussions.

That ability to communicate and a willingness to explain a decision or why he was handing out a ticking off was a big part of what made him such a good referee, one so respected by club officials, coaches, players and yes, even supporters.

Of course, he knew the rules inside out, but he was also able to effectively exert his influence to keep 26 charged-up blokes in check, with the minimum of fuss.

That was down not just to confidence in his own ability and decision making, but the fact that he understood what makes players tick, and within limits, was willing to allow a bit of the rough stuff, as long as things didn’t get ridiculous.

If a prop had a dig at his opposite number, he’d take them to one side and say ‘I saw that, and I’ll let it go this time, but don’t come to me complaining when he gets one back on you’.

A couple of stories about Billy stick in my mind.

He took charge of the first State of Origin game back in 1980, which in itself shows the regard in which he was held in both hemispheres.

It’s hard to believe now, but when it started, Origin was a controversial idea, with many arguing it would never take off.

The Aussie authorities were desperate for that first game, which was a one-off rather than first of three as we have today, to be a success, so there was no shortage of pressure on the man in the middle.

The venue was Lang Park, Brisbane, the place was packed and the atmosphere brilliant.

The contest was, shall we say, full-blooded, with a number of all-in brawls before Queensland took the honours.

It was the type of game that set the tone for the intense and high-quality event Origin has become, and while the fans lapped it up, there were some among the Australian officials and press who questioned Billy about why he hadn’t sent anyone off.

Quick as a flash came the response: “I’m English, so there’s nothing better than seeing 26 Australians knocking seven bells out of each other. Why would I spoil the fun by sending someone off?”

There was a similar tale, often told on Humberside, about Billy taking charge of a feisty Hull derby, which featured a 24-man brawl, the only players not involved being the two fullbacks.

As he and the touch judges separated the fighting factions, he stood between the two sides, summoned the two captains and the two fullbacks, smiled and said: “It’s a derby, so there’s going to be a bit of argy-bargy.” Looking at the two fullbacks, he added: “If it happens again and you two don’t get involved, I’ll send the pair of you off for cowardice.”

Smiles all round, situation defused!

Along with the likes of Fred Lindop, John Holdsworth, Gerry Kershaw and Ron Campbell, to name just a few, Billy was one of a number of great referees around at that time.

People are bound to compare them with the current crop, but I don’t think that’s fair.

I’m not a fan of referee bashing for the sake of it, and although I don’t think they should be above criticism, we live in a more toxic world, where too many people can say too many things without consequences.

Today’s referees are operating in a different environment, because of the number of cameras recording every incident. They seem to have to follow too many instructions and aren’t able to work in tandem with touch judges the way Billy and his colleagues did.

One thing is for sure – there’s no way he would have put up with having someone in the stand constantly chirping in his ear.

Billy’s attitude would have been ‘while I’m out on this rectangle of turf, I’m in charge and I make the decisions, and I stand or fall by them’.