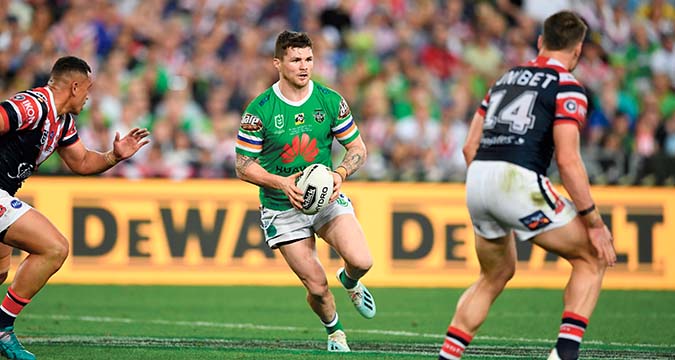 Canberra Raiders star John Bateman revealed how St Helens had made a serious bid for him, while he was at Wigan Warriors.

The 26-year-old was making serious waves as a youngster at Bradford Dudley Hill, prompting then Huddersfield Giants coach Nathan Brown to try to snap him up, but he ultimately chose to stay in Bradford with the Bulls.

That interest would be renewed, when Brown was at St Helens, with Saints beginning informal conversations for a move. The rivalry between his current employers and Saints was seen as a deterrent for the move.

But undeterred by the second refusal, Bateman added that Brown had made a third play for him while he was at Newcastle Knights, with the England international joining Canberra instead.

“Nathan Brown tried to sign me when I was coming through as a kid,” he told The Locker Room podcast.

“He was at Huddersfield at the time and me and my mum went to have a look around but I eventually chose to sign for Bradford.

“I remember getting a phone call off Sean Long at the time and he was like ‘what do you think of the opportunity (of playing for Saints)?’ and I was at Wigan at the time.

“If you are from England, you know the big rivalry between Wigan and St Helens. I thought I can’t be the player who makes that decision so I didn’t go through with it.

“The opportunity then came up about going to Canberra and Newcastle were involved but once I started talking to Canberra, it made my decision pretty easy to be fair.”