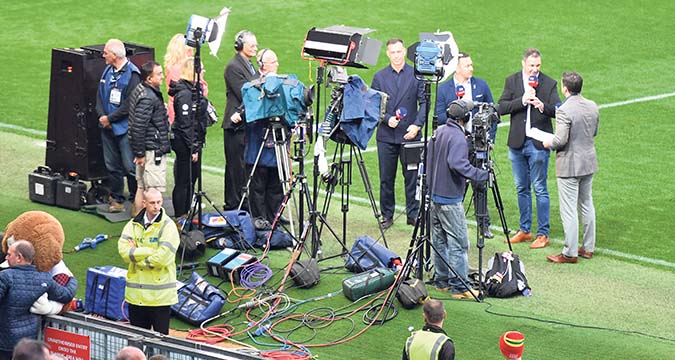 Super League clubs were told on Thursday that the broadcasting offer from Sky Sports for a new TV contract for the broadcasting rights to the competition will be around £20 million per year, confirming the figure that appeared in a news story posted on the Sky News website two weeks ago.

League Express understands that the offer hasn’t yet been accepted, however, and that it falls significantly short of what some of the advisers hired by Super League Executive Chairman Robert Elstone had suggested was the true value of the broadcasting rights.

The offer relates purely to the rights for Super League, as opposed to the current deal that includes the rights for all three professional tiers of the game.

The Rugby Football League retains the ability to sell those rights, although RFL Chairman Simon Johnson suggested on Sunday that it was unlikely that a deal would be agreed for those rights until Super League had completed its negotiations.

“As far as the Super League negotiations are concerned, there’s a detailed table that sets out what proportion of the money will go to non-Super League clubs. If the annual value drops below a certain figure we are then in good faith negotiations.

“We are also talking to the broadcasters and from a market perspective it’s hard to do a deal before the Super League does its deal.

“So although we are talking to other broadcasters, we knew that the Championship and League 1 would be on a slower track.”

“The Championship is a great competition and we are emphasising that in our TV negotiations.

“Our deal with the Challenge Cup was announced last week, giving us three more years with the BBC. We have retained our value and broadened and expanded our coverage to women’s and wheelchair Rugby League.

“When Super League broke away we supported their rationale, which was that Super League had to be the commercial engine. If Super League is successful the whole sport benefits.”

And Johnson paid tribute to the supporters of Championship and League 1 clubs.

“Championship fans have shown tremendous loyalty; almost without exception the fans have allowed clubs to retain their season-ticked money to survive.

“In the light of all the challenges, I’ve been impressed with the unity the sport has shown.

“Without it, we wouldn’t have had support from government. We have been resilient, unified and all pointing in the same direction in a challenging and threatening year.”

Meanwhile League Express can reveal that the private equity company Novalpina has made a formal offer to buy into Super League (Europe) Limited, subject to undertaking due diligence on the company it would be buying into.

League Express understands that under the terms of the proposed deal, Novalpina would assume management rights for the competition and would be entitled to receive a third of Super League’s broadcast income for as long as it holds its stake in the competition.

In return, League Express understands it would be prepared to pay up to £60 million for those rights, although Super League would have to pay £750,000 to Rothschild’s for introducing a potential investor.

The problem facing Super League, however, is that for the deal to go ahead, all twelve Super League clubs, now including Leigh Centurions, have to give their consent. Any one club could cause the deal to fail by vetoing it.