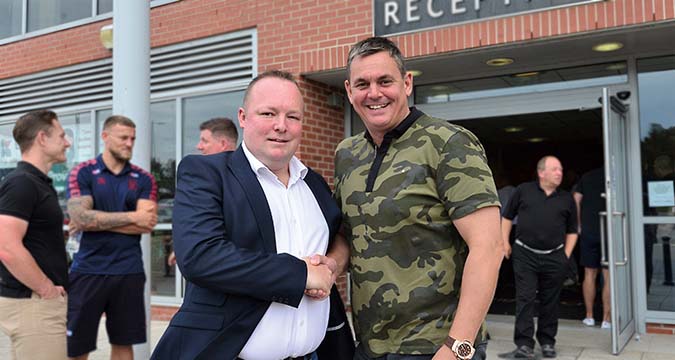 “If I’ve spent however much of my kids’ inheritance and all I’ve done is have a good time or paid players to get into Super League and I’ve not left something that didn’t exist before, what was the point of it?”

Derek Beaumont (pictured, right) has, for years, been determined on establishing Leigh Centurions as a Super League club.

He’s spent a lot of money in the process, and as it stands, his reward is one year in the top flight.

So, after last Monday’s decision to promote the Centurions, the club is now back in Super League and Beaumont is determined to make it last this time.

But that won’t see him just invest in a first-team squad to survive. While recruitment is expected, spending on the club’s infrastructure is also in the pipeline.

Beaumont wants to see the Centurions build strong Academy and youth structures to ensure the club is producing its own.

That, of course, will require the additional funding Super League status brings, but it’s a dream he is desperate to see come to fruition.

“You can’t just have an Academy,” Beaumont said.

“While some of the additional resource will go into staff resources and bonuses for staying up, we’ll already start towards going to build and put into play the Academy structures and the youth.”

Beaumont also says he will take inspiration from some harsh lessons learned from mistakes made in the past. In an open interview, he said he hopes to be less visible personally than during the club’s previous stint in the competition.

“We went to Wakefield away, we’d started well, beaten Warrington and Saints at home and should have beaten Leeds.

“We went to Wakey and look, I don’t want to dig things up, but the referee Campbell hasn’t reffed a game since. I naively put something on Twitter saying anyone could have ten grand if they could show the ball on the line. That didn’t cover us in any glory with the RFL match officials department. It doesn’t help you to be at loggerheads with them.

“We then lost to Cas 30-0 and I left Neil Jukes in the room and dealt with the press myself and used words that weren’t wise. But passion is a big thing and sometimes, it’s not an excuse, you’ve got to be bigger than that. But sometimes it overflows when you’ve got a lot on the line.

“I’ve learnt to have a lot more control of myself and to have better relations with the RFL and the clubs while having a bit more class about us.

And now we understand just how important recruitment is. Those lessons weren’t learned in Super League but after we were relegated in 2018, which we just got completely wrong.”