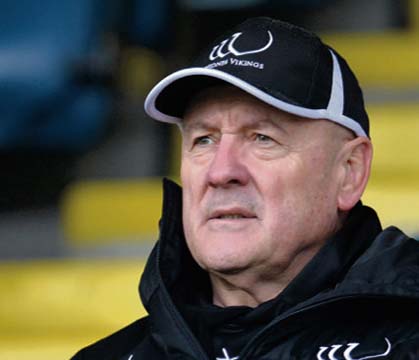 League Express editor Martyn Sadler reflects on the decision to appoint Tim Sheens as coach of the Combined Nations All Stars to take on England later this season.

Last week the RFL confirmed that Tim Sheens, the former Australian national coach, and more recently a coach of Hull Kingston Rovers and Widnes Vikings, will be in charge of the Combined Nations All Stars team that will take on England on 25 June at the Halliwell Jones Stadium.

The game will be a double header, with England Women taking on their Wales counterparts as a curtain raiser to the men’s game.

Of course the most controversial thing about the men’s game is the fact that there will also be Super League fixtures taking place on the same weekend, with some clubs, notably Hull FC in the person of the club owner Adam Pearson, suggesting that they may refuse to release all or some of their overseas stars to play in that game.

And who can blame him, when England winning the World Cup would deliver the greatest boost to Rugby League in this country for many, many years.

The Combined Nations team differs from the previous incarnation of the Exiles because the team will be open to all Super League players who qualify to play for a nation other than England.

That means, for example, that players such as Regan Grace of St Helens could be selected, or Benjamin Garcia, the captain of the Catalans Dragons.

The intriguing question, however, is whether players who qualify for England, but also qualify for another nation, would be selected for the Combined Nations team.

For example, Michael McIlorum of the Catalans and Ben Currie of Warrington both qualify for England and Ireland, while Morgan Knowles of St Helens also qualifies for Wales. Then there are the Australian players who played for Great Britain on the 2019 tour – Ben Austin and Jackson Hastings, who could also play for the All Stars but could then in theory be selected for England in the World Cup.

Tim Sheens spoke to the media last week only a day after he had been appointed as the coach of the All Stars, so he hardly had time to give much thought to the squad that he might assemble for this game.

But he certainly gave the impression that he saw the game as an opportunity to help England’s preparation for the World Cup, and he didn’t seem averse to a selection policy that would facilitate that aim.

The only danger that I can see is that if the game is to mean something, it has to be contested by two teams that are totally dedicated to performing at their best. In other words, the All Stars have got to want to win at least as much as England do.

If the players selected for the All Stars don’t see it as a genuine representative game, will they want to commit themselves fully?

It strikes me that Shaun Wane’s job in this instance is going to be far easier than the one Tim Sheens has to fulfil.

On that theme, Wales coach John Kear says he’s fine with the prospect of Wales players representing the Combined Nations All Stars, even though he decided against fixing up a World Cup warm-up match for his own side.

Kear, who has led Wales since 2014 having previously coached England, told League Express: “We thought long and hard, and decided against a mid-season international given the already congested nature of the domestic fixture list.

“If players are picked for the Combined Nations side, we certainly wouldn’t stand in their way, because it’s international rugby and a chance to play against one of the top teams in the world.

“But we feel the best option from a performance perspective is not to take part in an international match this summer, but rather have one during the final build-up to the tournament.

“For some of our squad playing in the Championship and League 1, this is the first time they’ve played for the best part of twelve months and they’ll already have a congested fixture calendar with their clubs.

“We don’t want to put them in a position where they’re possibly having to play for their club and country in such a short space of time.

“As well as that, some of our players are also based oversees and there’s still so much uncertainty about travel restrictions because of the pandemic.

“We’re regularly in contact with all our squad and planning some opportunities where we can get together during the season. We feel this is a far better option for us.”

It would be a great boost for Rugby League in these islands if Wales can have a strong World Cup campaign.