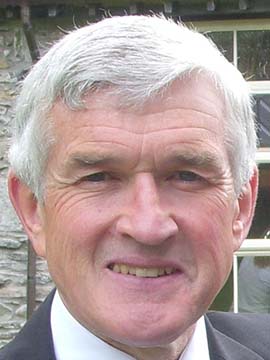 David Burke is a rare example of a Rugby League journalist who pulled on the boots and played the sport professionally.

After three seasons with Rochdale Hornets in the mid-1970s, including two in the first division, Burke worked as the Rugby League correspondent for four national newspapers and freelanced for many others.

Among many other positions he held, he was the press officer for Super League itself, and for Salford and St Helens. Now happily retired, he has a season ticket at the club he supported as a boy, Salford Red Devils. 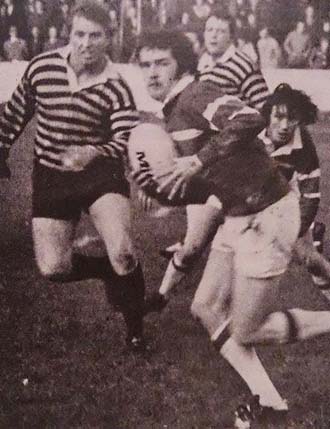 The day Rochdale Hornets beat York to win promotion in 1976. If we hadn’t won, Hull would have pipped us to go up. Tony Halmshaw was the captain, and we had a good side. We were losing, but we managed to turn it around.

“I felt a boot up my backside, and I wasn’t going to let it go,” Neil told me many years later.

Peter was a real character and a hooker of the old school. He was a top guy, and I was very sad when I heard he’d died recently.

How did you get into Rugby League?

I was a Salford lad and my dad, Eric, supported them when they dominated the game in the 1930s. He used to wax lyrical about the original Red Devils, and he reckoned it was the best Rugby League team he had ever seen with Gus Risman the best player. He could rattle off the whole side, and the names Lance Todd, Barney Hudson, Jack Feetham, Albert Gear and Alan Edwards were drummed into me from a young age.

I don’t think he went to the 1938 Challenge Cup Final when Salford beat Barrow, but he managed to get hold of a programme, which I still have.

It used to annoy him when folk referred to Manchester United as the Red Devils – he insisted there was only one genuine Red Devils team. United were imposters, he said. Even when I played for Rochdale at The Willows, my dad wanted Salford to win.

How did things progress for you?

I sold programmes at Salford as a 10-year-old. I was a ballboy. I operated the scoreboard – I did that that when David Watkins made his debut. The Willows was packed, and I had the best view in the ground.

I went to De La Salle, a rugby union school, but I was more into Rugby League. My friends and I formed an under-18 team called Height, and we played in the Rochdale League.

We were all sixth-formers and we ran it ourselves. I was the secretary. We had a very good sevens team, winning about four tournaments, including the University Sevens, when we beat Leeds in the final. Peter Massey, the referee, recommended me to Rochdale, and I signed aged 22 in 1975.

What memories do you have of your three seasons at the Hornets?

Graham Starkey was the coach when I signed, and he was before his time with some of his innovations. My debut came on an August Bank Holiday at Leigh. Wally Jones was also making his debut.

I was privileged to play alongside ex-Salford players like Mick Henighan, Stuart Whitehead and Bill Sheffield. Stuart was a hero of mine who had played in the 1969 Cup Final. Two of my best mates in the side were Tony Gourley and Alan Robinson. Everyone talks about Adrian Morley being the toughest player of recent times – and he was – but we had Alan Hodkinson, who was just as tough.

Graham was replaced by Henry Delooze, the former Barrow player, and he was the coach when we got promoted. Henry was then sacked early in November 1976 and replaced by Kel Coslett.

I remember a game against Wigan from that same month. I played stand-off. It was Kurt Sorensen’s debut – he hadn’t been at Wigan long and he wasn’t well known then. I could tell he was going to be a big star. I suffered a bad shoulder injury and was out from November to March. At half-time, as I was waiting to go to hospital, the Wigan coach Vince Karalius had the decency to come in to wish me all the best. It was a much-appreciated gesture and typical of Vince’s sportsmanship.

When I was fit again, I played against Widnes. They had great players like Jim Mills, David Eckersley and Mick Adams. We won 12-9, but it wasn’t enough to stay up, and it turned out to be my last game of professional Rugby League.

In each of your three seasons at the Hornets, you were either relegated or promoted. Are you in favour of the system?

Yes, promotion and relegation have to exist, but back then it was four up and four down, which was ridiculous. All it did was create a yo-yo effect. We finished fourth from bottom in a division of 16 after we won that game against Widnes, yet we were still relegated.

Why did you stop playing in your mid-20s?

I was working for the Salford Reporter and our editor, Tom Bergin, was the founder member of the Rugby League Writers Association. He used to give me time off to play, but I was ambitious with journalism. I was offered a job with the Daily Mail, working from 4pm to 1am, so I had a decision to make. I wasn’t a superstar and knew my limitations, so I decided to give up the rugby.

Not long afterwards, Peter Clarke went to Blackpool and recommended me, so I joined on trial for the 1978-79 season, training in between my shifts with the Mail. Blackpool’s coach was Bak Diabira and they had a good team. The opening pre-season game was against Salford. Eric Prescott tackled me, and I injured the same shoulder! After that, I concentrated on my journalism career apart from the odd amateur game for Langworthy and union for De La Salle Old Boys until I was in my 40s – much easier to play in advancing years than League!

My last game of Rugby League was actually for Lancashire Journalists against Yorkshire nearly 20 years ago. We had a decent team – Dave Hadfield, Dave Woods and Ian Cheveau, who scored four tries. I was 50 but was determined to play. My son, Mike, at 18, was scrum-half and I was stand-off. We won, but I broke two ribs. That was a clear message to give it up!

What are the biggest differences between Rugby League journalism in the mid-1970s to now?

Consequently, Rugby League took a back seat and the staff writers all disappeared over time. None of them now have full-timers, they all use freelancers.

There was a big difference in how a transfer story was reported back then. For example, when Saints signed Clive Griffiths, the Saints secretary phoned me, and I was the freelancer who sent it around all the national papers, so it was done totally differently to now.

My son studied journalism, but I encouraged him to go into TV and not print journalism because there are no longer the same opportunities for print journalists. He’s worked for PDI Media, who produced the Super League Show. He’s on the staff for the BBC and he produced the Watersplash documentary.

What was your journey?

I started at the Salford Reporter, then the Daily Mail, but I was always more interested in reporting than sub-editing, so at 27, I set up a freelance agency, concentrating on Rugby League. Phil Jones, who became a BBC tennis and athletics commentator, worked for me, as did Tony Gleave, who worked for the Rugby Leaguer. We covered other sports and general news too. I had good contacts, so I could dig out a story.

I worked for all the national papers as a freelancer, but mainly focused on the Manchester Evening News with Jack McNamara.

If Saints were playing Wigan, most journalists would be there, but I would go to Salford v Warrington, for example, and all papers would want a report as well as columns, so I’d be very busy.

I’ve been the Rugby League correspondent for the Sunday Express, the Sunday Mirror, the Daily Mirror and the Daily Telegraph. I’ve been Salford’s press officer and I was the first Super League press officer. One of the things I introduced there was press conferences, because it was a scramble to get into changing rooms after games for a quote.

Then I was the Saints’ press officer for three years and I’ve been the official freelancer for several clubs. It was a seven-day-a-week job. I loved it, and most coaches were good guys.

I went on six tours down under, starting in 1988. There’d be about a dozen journalists from the UK, but last time I think there were about two. I shared a room with Trevor Hunt, and he’d laugh at me getting up early and going for a run every morning. We would finish working at a game at about 11pm, and then you’d be up until 2am in your hotel room, writing everything up. But I can’t complain – we worked hard, and we played hard as well.

Rugby League has been my life. I’m 69 now. I’m a season-ticket holder at Salford, and it’s been great to watch them in the couple of years.

Tell us about your involvement with the Steve Prescott Foundation.

I’ve always worked hard and kept myself fit. I got involved with the Foundation and Steve used to joke with me that it was his dad who ended my career!

For one fundraiser, I did four marathons in four days with Tony Barrow, who sadly died of a brain tumour. That was tough, so I was certainly full of admiration for Kevin Sinfield doing seven in seven.

Another event we did was a bike ride from Perpignan to Wembley. Gary Connolly, Paul Sculthorpe, Chris Joynt and Steve Hampson did that too. That was just one leg though.

We then went on a dragon boat down the Thames and did a half marathon to Wembley before the Challenge Cup Final. Steve was an enormously inspirational man, and it was a privilege to be involved with his Foundation.