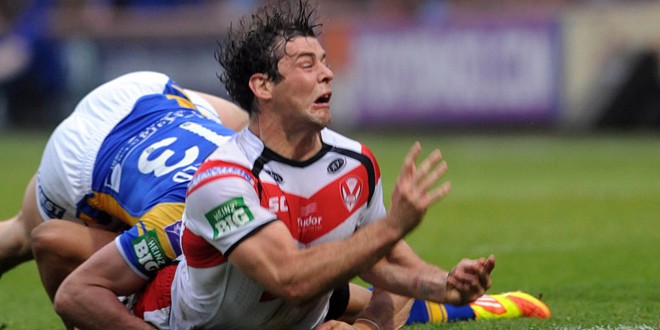 St Helens star Paul Wellens will be going into his seventeenth Super League season in 2014.

The Saints fullback made his debut in 1998, but this season he will find himself reverting to a shirt that he last wore in the year 2000.

Back then Wellens wore shirt number 17, before he took over the number 1 shirt from Paul Atcheson in 2001.

So there is a double irony that in Super League XVII he will be back in the number 17 shirt, with the number 1 shirt going to Jonny Lomax in 2014.

And Wellens, 33, insists he couldn’t be happier to hand over the shirt to his young colleague.

“Jonny will wear the number 1 shirt this year, and he will wear it with pride, as I did,” Wellens told League Express.

“If I have to hand that shirt over to someone, I’m very happy for it to be someone like Jonny. He’s a great young player who has come through the system here, and he works his socks off. So losing that shirt to him isn’t such a bad thing.

“I will have a utility role, as I had towards the end of last year.

“I’m not too worried if I’m on the bench or in the starting lineup. I’m just focussing on getting as fit as I can and being ready for the new season.”