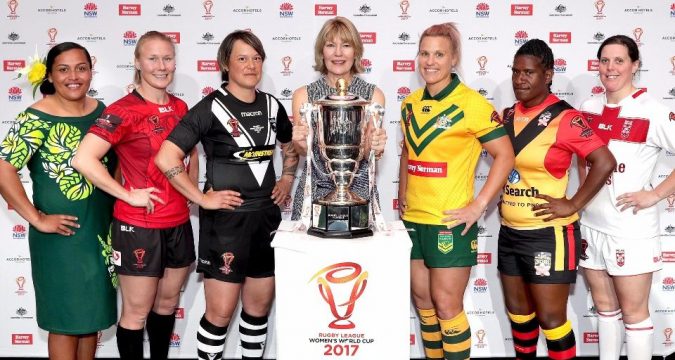 The rise of women’s Rugby League is set to reach new levels on an international scale with the 2017 Women’s World Cup – and the woman behind the tournament believes the promotion and exposure the world’s best female players will get over the next fortnight will have an ‘immeasurable impact’ on the sport.

The tournament, which begins in Sydney on Thursday, also has government and corporate backing in Australia, for its historic staging that will see the men’s and women’s champions crowned on the same day and stage in Brisbane (2 December) for the first time.

“This is just an amazing moment in time for women’s sport,” said Harvey Norman CEO Katie Page, whose company has been a long-time supporter of women’s Rugby League in Australia and is sponsoring the Rugby League Women’s World Cup.

“Through Channel Seven, Sky TV in New Zealand and EMTV in PNG, millions of people around the world are going to be watching you.  You are elite sports people and this is quite frankly what you deserve.”

RLWC2017 Chief Operating Officer Maria Sykes said: “To have the fifth staging of the Women’s World Cup broadcast into New Zealand, Papua New Guinea and the UK via the RFL website, as well as Australia, will have an immeasurable impact on the game.

“Through this amazing partnership, we will create history on a number of fronts. It will be the first time ever that men’s and women’s world champions will be crowned on the same day at the same venue in world sport.

“Let’s be very clear about what that means. No other sport has had both men’s and women’s world cup finals played on the same day and on the same field.

“And for the winners, it will be the first time they lift the new Rugby League Women’s World Cup trophy.”

RLWC 2017 CEO Andrew Hill said: “This is a truly historic moment for women’s Rugby League, not just in Australia but around the world.

“I thank the Australian, NSW and Queensland Governments for their great support that has made it possible for us to showcase the women’s teams to an international audience.

“I’m so proud that so many stakeholders have come on board with us. This is just the start. We are laying the blue print not just for women’s Rugby League, but hopefully other sports. We’ve now set the bar a little higher for other sports.”

With the support of the Australian, New South Wales and Queensland Governments the Rugby League Women’s World Cup 2017 pool matches and semi-finals will be played at Southern Cross Group Stadium from 16-26 November. The final will be played as part of a double-header with the men’s final at Brisbane Stadium on 2 December.

Australia will defend their title on home soil against pool rivals England and the Cook Islands; with New Zealand, Papua New Guinea and Canada competing in the opposing pool.