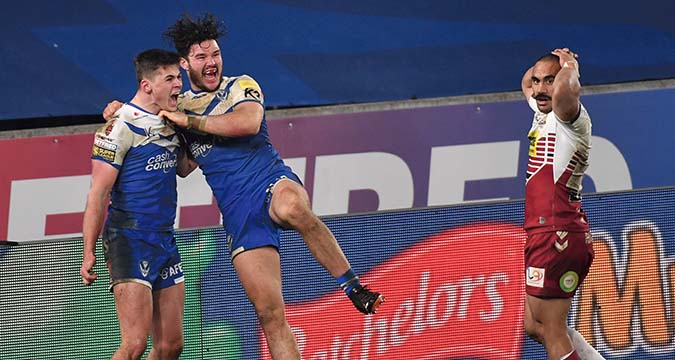 1: Never write them off
Since Rugby League began, the old cliché, ‘Never write off the Saints’, has been used to describe the side’s ability to pull victories from the jaws of defeat. That has never been truer than in 2020 when Wigan could have led 6-4 with two minutes to go in the Super League Grand Final. Instead, Zak Hardaker’s penalty went wide and Saints ran up the field to register an incredible try as the final hooter sounded.

2: Chasing and chase again
Jack Welsby’s try in the Grand Final epitomised the heart within the Saints squad. As Tommy Makinson’s attempted drop-goal appeared to be hitting the target, the 19-year-old sprinted 40 metres to put pressure on Wigan’s Bevan French under the posts. Welsby’s determination was rewarded as the bounce fooled French, with the youngster on hand to ground the ball.

3: Trophies are never won in March
Saints were in eighth place before lockdown with just three wins to their name with their final game before the halt of play a poor defeat to Castleford Tigers. Yet they recorded ten straight league wins following the resumption to move to the top of the table. Of course Wigan ended up with the League Leaders’ Shield, but Saints triumphed in the one that mattered.

4: Saints youngsters moving to centre stage
St Helens have always had a superb Academy to bring young players through their system, while they have always made astute signings of young players. In 2020 James Bentley, who signed from Bradford Bulls in 2017, nailed down a first-team spot, while Jack Welsby will be impossible to leave out in 2021. Lewis Dodd and both Josh Eaves and Simm also showed enough promise to be first-team contenders next year. And that’s not even mentioning Aaron Smith who is coming up behind James Roby in the hooking role.

5: The Challenge Cup continues to be a bogey competition
It was 2008 when the Saints last lifted the Challenge Cup, but even when the club has dominated league proceedings – as in 2018 and 2019, when they finished first – they just can’t seem to get over the line in the Cup, failing at the semi-final, final and quarter-final stages in the past three years respectively.

Saints ended the season in second place following 12 wins in 17 games. That record wasn’t as impressive as in 2019, when they won 26 from 29 games, but as long as you place close through to the top of the table, you can still run out the winner in the play-offs as the Red Vee did this year.

Despite a 48-0 thrashing of Leeds in August, the Grand Final in November was an incomparable result, even if it was very close. Lachlan Coote had put Saints into the lead with a penalty as the two sides went into the break, but Jake Bibby scored in the corner to move Wigan 4-2 ahead. Another Coote penalty eight minutes from the end levelled proceedings. Yet the Warriors appeared to be heading for the win as Zak Hardaker lined up a penalty 45 metres out. That went wide, however, and after Tommy Makinson’s drop-goal attempt careered off the post, youngster Jack Welsby was there to dot down in bizarre fashion.

An in-form Castleford managed to beat Saints 28-14 in March after taking a 14-0 lead. Tommy Makinson crossed just before half-time to give Saints hope, but a Cheyse Blair try and two Danny Richardson goals made it 22-4. Jack Welsby responded, but then Jake Trueman ended any hopes of a St Helens win. After that performance, Saints’ achievements post-lockdown would have seemed unimaginable.

Who else but James Roby? The number nine continues to play at the top of his game, despite being 35 years old. With more than 500 career games under his belt Roby is still churning out brilliant performances. His determination was no better illustrated than in this year’s Grand Final, as he scooped up his second Harry Sunderland Trophy, having made nearly 60 tackles in the middle of the field.

Josh Eaves and Josh Simm both impressed in 2020, but this accolade can only go to Jack Welsby. The 19-year-old dotted down nine times in 18 games, but he will forever be remembered for his last-gasp Grand Final effort. Welsby can play at fullback, wing, centre and halfback, but after his winning try at the KCOM Stadium he has gone down in St Helens’ folklore.

Kevin Naiqama really blossomed in his role at right centre for St Helens in 2020.
The Fijian captain travelled over to Super League from the NRL ahead of 2019 and while he was impressive last year, 2020 saw Naiqama step up in the absence of fellow centre Mark Percival for much of the season.
Naiqama scored a brilliant hat-trick in the Saints’ heavy defeat of Catalans Dragons in the play-off semi final in November

We’re sounding like a broken record here but when a moment is so important, it’s bound to feature time and time again in a season review. There’s really only one try that we could pick. Jack Welsby’s determination to follow up and ground Tommy Makinson’s attempted drop-goal when it came back off the post will be shown again many times in the years to come.

“You see him rock into training on a Monday sometimes and you don’t think there is any chance of him playing on the weekend because he can barely walk.” That’s what Saints coach Kristian Woolf had to say about James Graham and the gruelling process the veteran went through to actually get on the field.

When the camera shot to James Graham in the aftermath of the Grand Final, you couldn’t help but feel emotional; the flame-haired enforcer had left St Helens at the end of 2011 following five Grand Final losses. In Australia he lost two more Grand Finals with the Bulldogs in 2012 and 2014. But finally, the retiring 35-year-old got his second winner’s ring and the joy was there for all to see.

When Tommy Makinson and James Graham last hugged each other on the big club stage, it was in 2011 when the duo had just gone down to a 32-16 defeat to Leeds in that year’s Grand Final. That picture was clearly on their minds as they embraced after the final whistle this year, with Graham exclaiming, “Do you remember?” in reference to the heartache almost a decade ago.