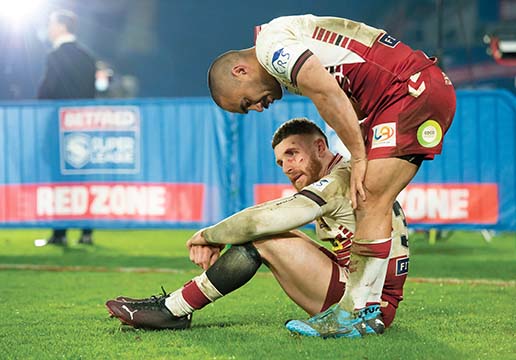 So near and yet so far

1: Wigan don’t give up and, if you are going to beat them, you have to be prepared to play for 80 minutes. The Warriors won the League Leaders’ Shield and then got to the Grand Final, where St Helens finally managed to overcome them in the final second of the final 80 minutes of the season.

2: The Warriors’ management know where their bread is buttered. As the season progressed there were doubts about whether their coach Adrian Lam, their halfbacks Jackson Hastings and Tommy Leuluai and fullback Bevan French would be staying at the club in 2021, but the club took steps to ensure all four of those key figures will still be at the DW Stadium this season.

3: Retiring captain Sean O’Loughlin will be badly missed for his leadership skills in 2021. O’Loughlin turned 38 three days before the Super League Grand Final, becoming the oldest man to play in a Super League Grand Final, but it wasn’t a fairytale ending, although it was good to see the St Helens players giving him a guard of honour as he left the field at the KCOM Stadium.

4: The League Leaders’ Shield is a worthy trophy, but it doesn’t compare with winning the Super League Grand Final. Wigan coach Adrian Lam looked quite pleased to have won the former, but he looked totally devastated not to have won the Super League trophy. We suspect he would have been happy to finish second in the final league table if it meant that he could have defeated St Helens in the Grand Final.

5: Big signings sometimes don’t deliver the goods, often because the player concerned is carrying an injury he can’t shake off. That was certainly true of George Burgess, who Wigan signed with a great fanfare from the NRL’s South Sydney Rabbitohs. Burgess, who had been expected to be a forceful addition to Wigan’s pack strength, would only play eight games for the club, with six of them coming off the bench, as he was dogged by a troublesome hip injury that he was never able to fully recover from. Wigan fans will be hoping he has better luck in 2021.

Wigan edged out St Helens and Warrington to finish at the top of the Super League table, but they just failed to turn that triumph into an even greater one with that agonising defeat to Saints in the Grand Final.

Wigan’s 18-6 victory against St Helens on 30 October was a surprise for some people, but it was that result that won them the League Leaders’ Shield and it filled the Warriors with confidence that they would be able to repeat the result when the two teams met again in the Grand Final, although it wasn’t to be.

By far their worst result of the season was Wigan’s 26-12 Challenge Cup semi-final defeat to Leeds Rhinos at the Totally Wicked Stadium in St Helens in very rainy conditions on 3rd October. Wigan never adapted to the conditions and they were tactically outplayed by the Rhinos, who went into the final ten minutes of the game leading 26-0. However, Wigan were still able to show their tenacity by scoring two late tries by Harry Smith and Zak Hardaker, which made the result look perhaps more respectable than it really was. 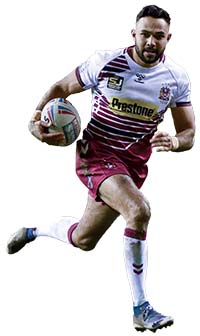 Bevan French (left) had an agonising end to the season, when he had to watch St Helens’ Jack Welsby touch down the ball for the winning score in the Grand Final, after Tommy Makinson’s field-goal attempt had hit a post, but that shouldn’t detract from the fact that French was a delight to watch all season and Wigan fans will be delighted that he will be back at the helm in 2021.

Harry Smith played 17 games for Wigan, eleven of them off the bench, scoring four tries and two field-goals, and, at the age of 20, he looks well qualified to secure one of the starting halfback slots at the DW Stadium, although the arrival of Jay Field from the NRL’s Parramatta Eels in 2021 could complicate that situation.

The obvious choice is Bevan French, but at least one other overseas star deserves a mention too. Thomas Leuluai was wholehearted, as always, but Willie Isa played in every Wigan game of the season and he started in every game in which he played. It was a phenomenal season for the Samoan star, who must surely be looking to add to his one Samoan cap for this year’s World Cup tournament.

On the first day of March Wigan travelled to Huddersfield and beat the Giants 42-10, with winger Liam Marshall scoring a try hat-trick. His second try was an amazing effort, as he fielded a Giants’ kick-off, ran forward and kicked the ball over the Giants’ defence, picking it up again and completing a superb try that had covered the length of the field. It was an unforgettable moment.

“It’s really heartbreaking for the players. We did everything possible at the end to get the win because I thought we deserved that. I thought our boys were unbelievably great. We kept turning up for each other. You don’t want it to end like that. I thought we deserved to win. We had opportunities and we didn’t quite convert them and I think that’s what got us in the end.” An emotionally gutted Wigan coach Adrian Lam, speaking immediately after the Grand Final.

Sean O’Loughlin ending his career in the Grand Final and being given a guard of honour by the players of both Wigan and St Helens, after he and Saints’ retiring star James Graham had embraced each other.

So near and yet so far! It has to be that thrilling ending to the 2020 Grand Final, which was agonising for Wigan and exhilarating for St Helens as Jack Welsby touched down for the matchwinning try, consigning Wigan to being the runners up.