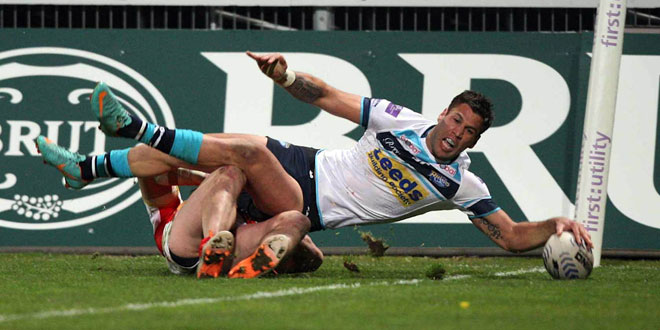 Joel Moon has agreed a new deal with Leeds Rhinos that will keep him at the club until at least the end of the 2018 Super League season.

The 25-year-old has agreed a new five year contract, which includes this season, and is hoping to enjoy some good times ahead with the Rhinos. He commented, “It wasn’t really a big decision for me to agree to the new contract. The club have been great to me and my family and that has been key for me. I am glad that I have signed a big contract with Leeds, things have gone better than I could ever imagined when I first made the move here and I am excited about the future both for me and the team. This is the longest contract I have ever signed with a club but it is great for me especially at this time because it gives security for my family with us expecting our second child soon. I am happy here and most importantly my family are happy here. To be honest, when I first came over to Super League, I did not see myself staying as long as I am but the competition is really strong and I think it has brought out the best in my game.”

Moon joined the Rhinos last season from Salford having previously played at Brisbane and New Zealand Warriors as well as playing for the NRL Indigenous All Stars and the Super League Exiles representative teams.

Leeds Rhinos Head Coach Brian McDermott added, “This is fantastic news for the club and our plans for the next few years. Joel is pretty unique in the modern game given that he came from the NRL at a young age and has committed his future to the Rhinos and our competition. His try ratio is better than one in every two games and he has come up with some big tries for us, including last Saturday’s effort against St Helens. I think it speaks volumes about how committed the players are to one another that so many are happy to agree long term contracts with the club and see their future with the Rhinos.”