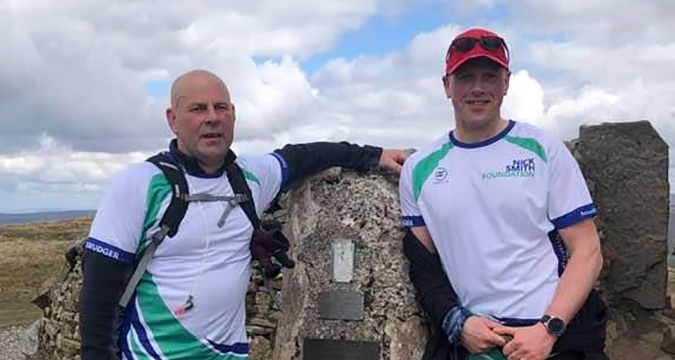 A group of players, coaches and friends from Siddal ARLFC in Halifax have completed the Yorkshire Three Peaks three times in three days to raise money for The Nick Smith Foundation.

The team, led by Head Coach Martin Scrimshaw (above left, with colleague Steve Ridley), began their Triple Peak Challenge on Saturday and completed it on a rain-soaked Bank Holiday Monday. They were spurred on by strong support from those who recognised the scale of the 72-mile in 72-hour trek climbing Pen-y-ghent, Whernside and Ingleborough.

The money donated has now topped £15,000. It will go to the charity that was set up in memory of Siddal’s former captain, and team-mate to many of those taking part, Nick Smith, who died in 2017 at the age of 38 from motor neurone disease.

Its aims are to support research into the disease which killed Nick, help children who have had to face the death of a parent at a young age, as Nick’s children have, and to promote Rugby League to young people to encourage them to take up and develop their skills.

Coach Scrimshaw was one of those who came up with the idea of the Challenge and completed it at the weekend.

“We love a challenge at Siddal but this tested us all like never before,” said Martin.

“Most of us had done the Yorkshire Three Peaks before but never more than once, let along three times on consecutive days. It has taken a huge toll on us physically, but it is nothing compared to the pain which Nick went through with MND, or the suffering so many others with this cruel disease are facing every day.

“Thank you to everyone who has supported us – the amount we have raised is beyond anything we expected and we’re humbled by the donations from so many people. I know it will make a big difference to the Nick Smith Foundation and the amazing work they do.”

Rachel Smith, Nick’s wife, followed the Triple Peak Challenge through the weekend and sent messages of support to those taking part.

“Nick loved Siddal and Siddal loved Nick, and I continue to be so proud of the love and support which the club – its coaches, players and supporters – have shown to me and all of Nick’s family in the years following his death,” said Rachel.

“I’ve done the Yorkshire Three Peaks. But I can’t imagine doing it three times in three days and I can’t thank the team who took part enough for putting themselves through this gruelling challenge, in all weathers, for the charity set up in Nick’s memory to ensure he has a lasting legacy.

“Thank you, you truly smashed it Siddal.”

Stephen Naylor, Chair of The Nick Smith Foundation, said: “The Triple Peak Challenge started on our third birthday as a charity. The money raised, at a time when so many charities have suffered from drops in income due to coronavirus, will make a huge difference to the work we are able to do.

“We promise to use it to make a big impact on our aims, to improve the lives of people living with MND and those impacted by it, and support the sport Nick loved, rugby league. Thank you to everyone who donated.”

The fundraising page for the Triple Peak Challenge is still open and can be seen at www.triplepeakchallenge.com.