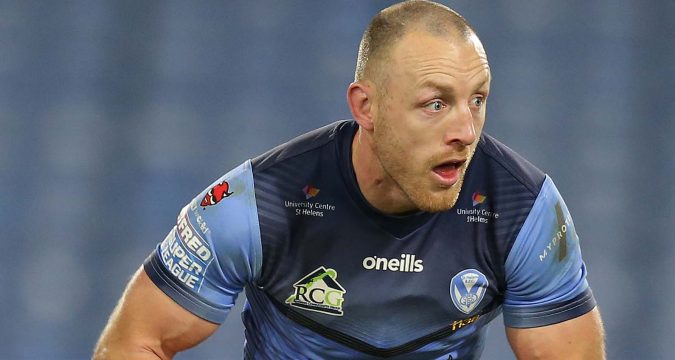 What a player James Roby is!

On Sunday he played his 500th career game, when he turned out for St Helens against Castleford at the Totally Wicked Stadium.

He is now in his 17th season with St Helens, after making his debut at the old Knowsley Road ground on 19 March 2004, when St Helens played host to Widnes Vikings and registered a 38-20 victory.

The star of the show that day was Saints’ iconic halfback Sean Long, with Roby selected for his debut as a substitute, and his performance that day was notable enough to attract the attention of our reporter Mike Latham.

“Long then got on the end of a move fashioned by props Ricky Bibey, making a long-awaited debut after injury, and Nick Fozzard and streaked away for his second try that killed off the Vikings’ brave challenge,” wrote Mike.

“The other Saints new boy, 18-year-old James Roby, another off the famous Cowley High School production line, was then involved in the move that led to Lee Gilmour confirming Saints’ comeback near the end. With Long sitting out the closing minutes, Hooper landed a magnificent touch-line conversion.”

Ricky Bibey didn’t last beyond the 2004 season at St Helens, but Roby has enjoyed a stellar career, initially as the understudy for Keiron Cunningham, but then, after Cunningham’s retirement in 2010, as a permanent fixture in the team.

Inevitably there have been approaches from NRL clubs in that period, but unlike his great mate James Graham, who made his St Helens debut a year earlier in 2003, Roby never succumbed to those offers, although I have no doubt that he would have been a sensation in the NRL.

Roby, however, isn’t someone who appears anxious to promote himself. Unlike some leading sportsmen, he doesn’t appear to have an overweening ego. He’s a player who does his job to the best of his ability, who then goes home and enjoys his family. I suspect that Rugby League’s relatively low profile nationally quite suits him. I can’t imagine that he would welcome the increased scrutiny that a higher profile for the game would bring.

Having said that, Roby does have a number of individual achievements to his name, including being the first player to score a try at the ‘new’ Wembley Stadium in 2007 when St Helens beat the Catalans Dragons, and winning the Man of Steel award in that same year, while he would also win the Harry Sunderland Trophy for his performance in the Grand Final in 2014.

And now, at the age of 34, I wonder how many appearances Roby will eventually make, as he still looks to have plenty of rugby left in him, and from speaking to him earlier in the season I know he has his eye on next year’s World Cup.

In the modern era Kevin Sinfield has made the most career appearance, with 569, followed by Adrian Morley, with 558 and Jamie Peacock with 556.

And Roby is hot on the trail of his England teammate Sean O’Loughlin, who made his 500th career appearance against Castleford Tigers in February.

Having said that, even James Roby would find it impossible to emulate some of the players from the olden days.

The great Jim Sullivan of Wigan, for example, made 928 career appearances in a career that lasted from 1921 to 1945, while Gus Risman made 873 appearances and, more recently, the great Neil Fox made 828 appearances between 1956 and 1980.

Nowadays we play fewer games than they did in those days, so there is no doubt that those records will probably last for all time.

Nonetheless, in the modern era, to play 500 games is an amazing feat and I would like to send James Roby my hearty congratulations for his achievement.

This article is an amended version of Martyn Sadler’s ‘Talking Rugby League’ column from this week’s League Express.

To take out a subscription to League Express, whether in print or digital form, go to www.totalrl.com/league-express.