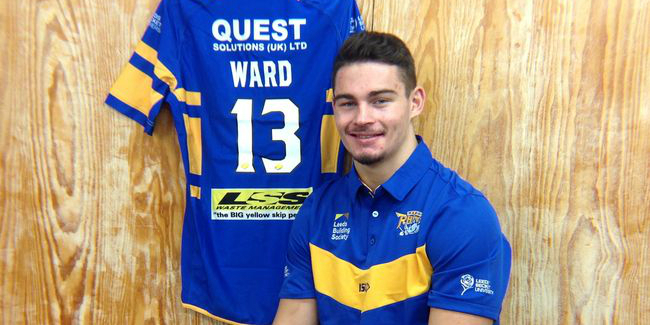 Stevie Ward has revealed his delight after signing a new five year contract with Leeds Rhinos, and being handed the iconic number 13 jersey as a result.

The 21-year-old, who is to have an operation on a knee injury today, has signed a deal that will keep him at the Super League and Challenge Cup champions until at least 2020.

And as a reward for his loyalty, the club have handed him the shirt worn by the legendary Kevin Sinfield for the last 15 years.

“I am immensely proud that the club have decided to give me the number 13 squad number,” said Ward, who has already made 82 appearances for the club.

“It is a dream come true. I was six when Kev first wore it so that is all I have ever known and it is an honour to receive the number after him. Growing up supporting the Rhinos, it was my dream to play for Leeds but it was always the number 13 shirt that I wanted to wear.

“I was really pleased with how last season went for me, it was my most consistent season so far.

Time for the op now- Made up to receive the messages, thanks everyone ??

“Since I suffered the injury, it has obviously been frustrating but I am positive about the future. The injury was complicated so things have had to take their natural course. I will have the operation on my knee on Monday and it will be assessed after that how long I will be out for. This has been a massive boost for me as I look ahead to the next few months and getting myself back fully fit.

“I was delighted to sign my new contract as well. There is a great group of young players here at the club who have committed to each other, and the club, to take the Rhinos forward over the next few years.

“The club have continued to show faith in the young players and rewarded them with long term deals so we can build something special together. Inevitably that will take time but we know from recent history the benefits that brings.”