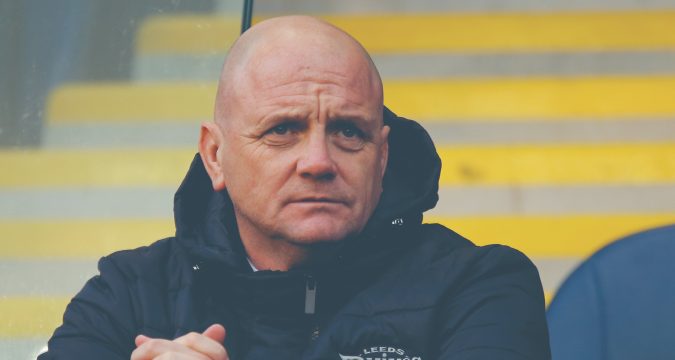 Leeds Rhinos Coach Richard Agar will take his players back to school this week to learn the lessons from two copycat defeats to Catalans Dragons.

Leeds suffered a second consecutive second-half collapse in Perpignan on Friday night, losing 27-18 at Stade Gilbert Brutus just seven days after an almost identical performance and result at Headingley, the Rhinos failing to score a single point after half-time in both fixtures.

Agar told League Express: “We haven’t learned some lessons from last week, or maybe haven’t put our message across strongly enough during the week about what to do when we are in front.”

The Rhinos coach said he would be hammering home the lessons learnt from both games at training this week and singling out individual players who had “exceptionally poor efforts.”

He added, “We talked about last week and we knew Catalans would come out strong.

“We knew the guys we’d have to handle and the style of play, but we dropped the ball on our first set of the second half and then gave a seven-tackle kick away and we didn’t see the ball for ten minutes because we didn’t defend hard enough in the ruck.

“They are the bits as a coach that cause frustration and disappointment.

“We need to hold some blokes accountable because I thought there were some exceptionally poor efforts in a couple of their tries.

“Some individual efforts were way short of what we expect in this team.”

Agar will focus on defence and discipline as he prepares his players for Friday’s clash with Salford Red Devils at Headingley.

He said, “I felt the biggest contributory factors (to the defeat in Perpignan) were a lack of discipline and a lack of composure in the early parts of the second half.

“Once the momentum started to go Catalans’ way we couldn’t get it back.

“I thought we had a lot of players who tried very hard, but at the same time we were let down in some areas and there were some really poor performances.”

Agar had to cope with the sudden loss of King Vuniyayawa for the France trip because of a last-minute visa issue, plus Morgan Gannon couldn’t travel because he was isolating after a family member contracted Covid.

That, together with the loss of Bodene Thompson and Rhyse Martin to suspensions, put added strain on team selection for the Catalans match, but Agar refused to make any excuses for the defeat.

He said, “I am not going to make excuses, if you want them there are some excuses and factors, but the first place we will look is at ourselves.

“If we want to sit behind excuses we can, but Catalans travel away every second week. I know the conditions are a factor, but they seem to be doing all right with it.”

A big positive for Leeds was the performance of centre Harry Newman, who returned from injury after ten months of recovery from a broken leg.

Agar added: “Harry got through okay. He fatigued a bit and we would have liked to have got him off earlier, but we had to roll our middle around and we couldn’t get Callum McLelland on until late on.

“Unfortunately, we had to play Harry a bit longer than we anticipated, but I thought he got through it all right.

“After such a big injury and so much time off he’s probably not going to look 100 per cent, but he will get there quickly.

“I thought it was an exceptionally good performance, given what’s happened to him.”