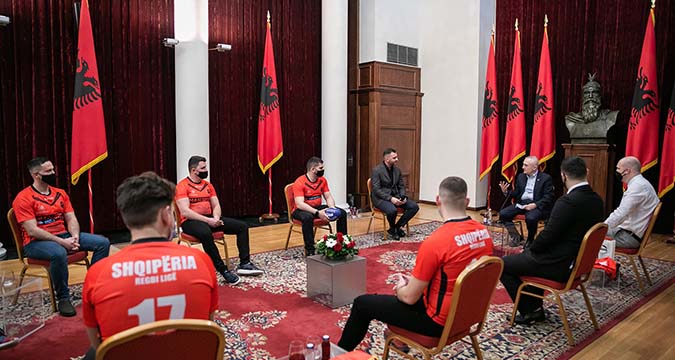 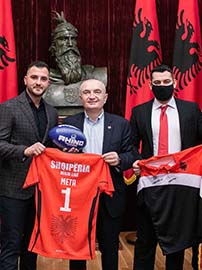 Albania Rugby League is set for a period of expansion after being invited to outline their plans to the country’s president, Ilir Meta, at the Presidential Palace in Tirana. The delegation shared with him their goals as well as difficulties and obstacles, ahead of the sport’s latest push for formal recognition in the nation.

“It was an honour to get the call and meet him,” said Arnaldo Telo, president of Albania RL. “He was keen to promote rugby league and its values and the new opportunities that it can offer to the youth of Albania and bring them closer to the sport.

“Internally our focus is completely on state recognition. Albania Rugby League is well known and the president’s institutions recognize it as the only rugby organization in country, but we are working to have the de facto legal recognition and forming our own federation, which will give us more opportunities to achieve even greater success for rugby league in our country.”

“We are pleased that the Albanian Association of Sports Sciences will assess our athletes through professional testing and evaluation,” Telo confirmed. “This information will be added to a national database where the physical fitness of each athlete will be available. Furthermore, this will align our sport with others in Albania, which brings us closer to professionalism.”

Telo added: “Despite the difficulties that the global pandemic has caused in sport, this period has been used to develop an international calendar for Albania, with the key objective of having a sanctioned match by the RLEF and IRL. We hope this project will bring interest from the community in Albania but also from Albanians abroad.”

That increased co-operation and awareness has been seen with the governing body in Greece offering club side K.R. Tirana a place in their domestic Championship when it safe to resume, together with an official link and planned player-exchange scheme with long-established English community club Hull Dockers. The Greek Federation has also offered to take education courses for aspiring match officials and coaches from Albania.

Telo said: “In addition, our new relationship with Turkey Rugby League will offer more opportunities between the two nations. Within our five year strategic plan, we aim to become affiliate members of International Rugby League by creating two new domestic clubs and we also hope our national team will be participating in Euro D competition.

“We have already seen the introduction of a second team, also based in Tirana, Ilirët XIII, who have played a 9s match against K.R. and we have plans for another team in Vlore city, at Flamurtari. But at the moment we have put all our efforts on the federation and national team.”

This is the year of the Rugby League World Cup 2021