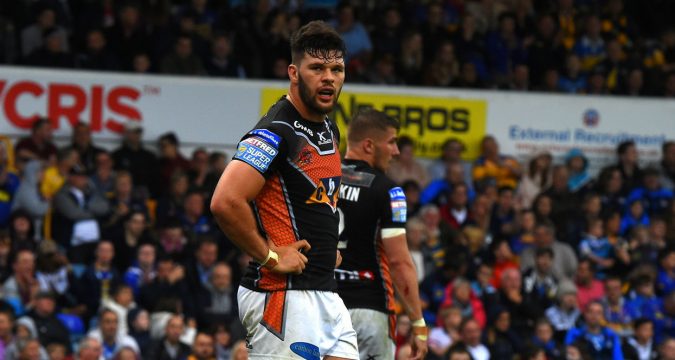 Castleford forward Alex Foster has revealed how he almost gave up on Rugby League to return to University before becoming part of history with the Super League leaders this year.

Caught up in the fallout of Bradford’s liquidation just weeks after signing with the Bulls, Foster, like many others, found himself facing the very real prospect of stepping into a different career this year.

But the Tigers offered him a trial which subsequently turned into a permanent deal, with Foster making over a dozen appearances to help Castleford win the League Leaders’ Shield.

He revealed to League Express: “I was in limbo for a couple of weeks and weighing up what I was going to do with my future and I had rent to pay and things like that.

“I was going back to University. I’ve never had a ‘proper’ job, I’ve been in rugby league since I was 18 and been in education so that was something I was looking to go back and do. It was worrying but I was so grateful Cas came in with the offer to take me on trial.

“It was a risk for them but since then, it’s been amazing. It’s hard to believe that was only a few months ago and now I’m sat with a League Leaders’ Shield medal.”

Foster was actually injured when he joined Castleford on trial, and admits he’s grateful to Daryl Powell for the opportunity to return to Super League after initially struggling to cope with the rigours of top-flight rugby.

He said: “The one thing that was very difficult was the speed and intensity of Super League.

“I’m okay with saying I was behind the pace when I came back, having been injured and been in the Championship for two years. But after those first few games, I eventually felt like I was getting used to it.”

Meanwhile, Tigers coach Daryl Powell has hinted there is unlikely to be any further transfer activity at Castleford for 2018. The Tigers have made just one major signing, Newcastle’s Joe Wardle, for next year, and Powell says he’s more than happy with what he has at his disposal already.

“There won’t be a massive amount coming in,” he said. “We’ve got a bit of leeway but not a lot, so if anyone does come in it’ll be a bit of a bolter. I wouldn’t imagine we’ll be doing too much more; our squad is really solid and we’ll be looking for players within the squad to improve and enhance their reputation.”