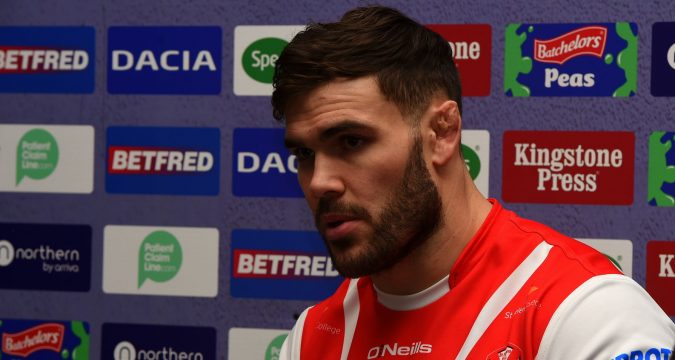 St Helens star Alex Walmsley has ended speculation over his future after signing a new four-year deal with the club.

The 27-year-old had been strongly linked with a move to the NRL at the end of the season after catching the eye of clubs Down Under after an impressive World Cup campaign with England.

St George Illawarra Dragons were among those heavily linked with the forward, but he has signed a new contract that will keep him with the club until the end of the 2022 season.

It comes as a significant boost to head coach Justin Holbrook, who had stressed the importance of keeping the powerhouse at the club.

“Alex is the leader in our pack and this contract means we can continue to build around him for the foreseeable future,” Holbrook said.

“He has tremendous go forward and work-rate to go alongside his professional attitude and standard he sets for the younger members of our squad. His story should also serve as a message to those in all levels of our game.

“It is a massive bonus for our club to have Alex re-sign on the eve of the 2018 season. There has been a lot of interest from clubs in the NRL and deservedly so. I believe Alex is the best forward in Super League and showed his qualities even further for England in the recent World Cup.

“Alex is not only a fantastic player but more importantly a tremendous person and the fact he has decided to extend his contract with us proves to our club and the Community that he loves playing for St Helens.

“I know he will be doing his absolute best to make us successful now and in the future.

“I am personally very excited about having Alex remain at the club and all Saints fans should be also.”

Walmsley’s professional career started at Batley Bulldogs before joining the Saints in 2013. He has made 147 appearances in the red vee, winning the Grand Final in 2014 and earning a Man of Steel nomination a year later.

“This is superb news not only for the St Helens club but for the British game,” Saints Chairman Eamonn McManus said.

“Alex is an international class player who has been at the forefront of the sport over the last few seasons.

“He has established himself as one of the best forwards in the game and it is fair to say he can only get better too.

“We know Alex was courted by several NRL clubs and I have no doubt that this signing will be a boost for everyone in Super League.”