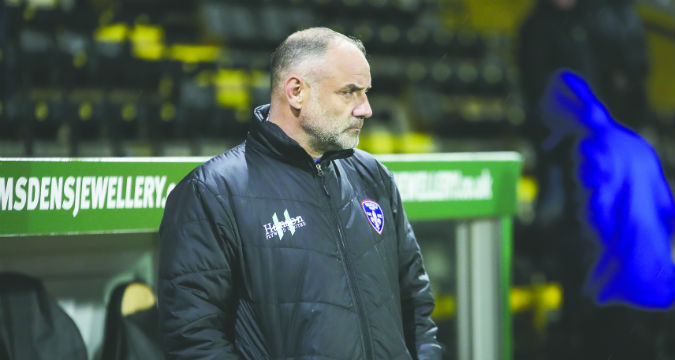 Wakefield Trinity Chief Executive Michael Carter has hit out at the RFL disciplinary process, after three players from Wakefield and St Helens received suspensions following Friday night’s clash between the two clubs, with St Helens’ Sione Mata’utia being forced to miss this Saturday’s Betfred Challenge Cup Final after successfully appealing a two-match suspension, but only to the extent that it was reduced to one match.

Wakefield’s Ryan Hampshire and Joe Arundel were both suspended for one match for dangerous contact and a late tackle respectively.

But Carter was frustrated by those decisions, and not just for his own players.

He issued the following statement.

“The Club are extremely disappointed to find that following last Friday’s game against St Helens, three players find themselves suspended with one actually missing a Challenge Cup Final.
The game was everything rugby league was renowned for. Two teams going hammer and tong at each other and, on the final whistle, congratulating each other on their respective performances.
Monday morning then brings some random charges against Joe Arundel, Ryan Hampshire and Sione Matautia. I’ve had two other CEO’s contact me asking what the incidents were, because they’ve watched the video and can’t find anything.
Jonny Lomax takes the ball to the line, and Rocky Hampshire literally pushes him open-palmed in the back. Jonny jumps up and takes the ball at first receiver on the next play. No complaint, no penalty, play on.
Joe Arundel loses his legs on a slippery surface but completes the tackle without any complaint from the opposition.
Sione goes to pressure a kicker like is seen in every single game. No complaints from the kicker who bounces back up and plays on. No complaints from us as a Club.
It was a tough game and the best team won. Sione now misses a Challenge Cup Final against his brother on the back of it. I guarantee I could find 20 worse incidents in our game.
I am all for eradicating foul play, but these are just one nameless persons opinion on a Monday morning. In the eight years I’ve been in charge, I think I’ve only appealed two charges. That’s because it’s impossible to win an appeal unless you’ve enough evidence to free Ronnie Biggs. Three people sit there, two of them not saying anything, with no experience of the modern game, an inability to take any sort of mitigation into account, and an overriding ability to just say ‘guilty’. It’s just pointless appealing. They just support the Match Review Panel!!
How can that be an equitable process? It would be really interesting to see, what percentage of appeals have ever been overturned. You have to prove your innocent, contrary to common law. What a way to feel in an ‘Elite’ sport.
At a time where we are all struggling to fulfil matches through various factors, to lose two players to these ‘offences’ just takes the biscuit. There is no accountability at all within this process.
Therefore, as things stand, we have 14 currently training and available to play, as our academy is being kept separate for Covid reasons. We will select some academy lads, but they won’t have a full training session with the first team, due to our current COVID protocols. We will, however, fulfil the fixture against Salford on Friday because unlike some others, this Club refuses to put a price on integrity!”