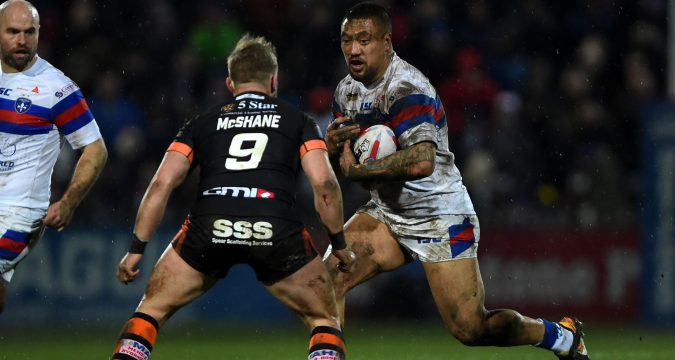 Tinirau Arona is finally getting an off-season.

The Wakefield forward is back to full fitness after overcoming gruelling ACL surgery, which left him on the sidelines for ten months before he made his return to the field earlier this month.

Arona’s comeback came with several sacrifices. After suffering the injury last May, he spent the usual off-season in rehabilitation, which prevented him from returning to Sydney to see his family.

Instead, he started running again during the cold British winter months.

That all felt worthwhile once he got back on the field, though he admitted the layoff had hit him harder than he expected.

“When I first got injured I underestimated the injury and the toll it would take on me,” he said.

“I underestimated the amount of work and more so the mental side of it. The ACL injury, is not an injury where you make progress week by week. It’s not just ups, there are a lot of downs and you have to keep sticking at it. Your whole life revolves around the programme.

“Obviously the first bit is the surgery. You can’t walk for a few weeks and you have to let the scar and surgery heal before you can do any exercise. It’s a real slow progression before you can run, about five to six months, so there’s a lot of the rehab work in the gym when your team-mates are outside playing.

“You’re on your own a lot of the time. Unfortunately for me, it fell during the off-season, so I still had to keep up with my training and my rehab programme. I didn’t go back to Australia like I normally do. Eventually I got back into training with the team in the Christmas period, but you have bumps along the way, little niggles you might pick up. Everyone’s journey is different.”

Having now returned to the field, Arona’ return to action has been halted, like the rest of his peers, because of the lockdown.

“I felt like I came back and got a taste of Rugby League again,” says Arona.

“I missed it so much over a ten-month period. To get back playing after a lot of hard work in rehab, and then it’s stripped away again, is a bit frustrating. But at the same time I didn’t get an off-season, so I’m treating it like that now, to get some quality time with my family and work on some things for when we can get back onto the field.”