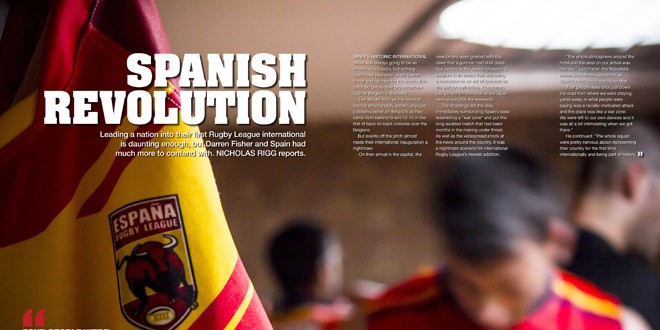 The growth of Rugby League in Spain will be further supported by a visit from BARLA Youth to Valencia later this month for two matches against Spanish youth national teams.

The Spanish U23s will play the best from the British community clubs on 21 April, and the U21s will face the tourists two days later.

“The visit of BARLA is an event of great importance for our development and clear evidence of the growth of Spanish rugby league,” said Aitor Dàvila, head coach of both Spanish sides.

“Spain is gradually beginning to shine on the international stage thanks to our development project and our youngsters have a great opportunity to be measured against a powerful side – it’s going to be a huge challenge for us.

“We have had a very intense couple of weeks’ preparation and are looking forward to the visit with great enthusiasm.”

Iván Ordaz, Spanish U21 skipper added, “Very soon Spain will have the amazing opportunity of playing a match with a British side. This is a great responsibility for the players as it will be a very high level match and we will have to be at our absolute best.”

The British squad was selected from the County Tri-Series, which, according to BARLA international manager Mick Turner, was the best so far at this age group.

Coach Brett Turner said, “We’re all very excited about this opportunity. To represent your country is a huge honour and something that we’re all very proud of.

“The players have all trained very hard in preparation for this. These tours are about more than just rugby, it’s also about these lads getting to see another country and experience the culture that comes along with it.

Turner continued, “It is a very talented group of players that we’re taking over there but we’re not taking the Spanish opposition lightly.”