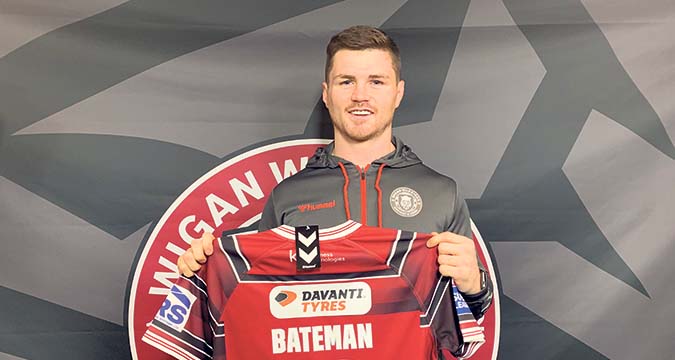 John Bateman is keen to be part of Wigan’s leadership group after being handed the jersey of one of the club’s greats.

Bateman will wear squad number 13 next season, following on from long-serving club captain Sean O’Loughlin, who will be inducted into Wigan’s Hall of Fame for his contribution to the club.

Returning to Wigan for his second spell, after having enjoyed five seasons at the DW Stadium between 2014 and 2018, Bateman says he returns as a leader after his NRL experience with Canberra Raiders, and he wants to help the club as it enters a new era.

“I feel as though I left as a young man but, with some leaders leaving, I want to be a part of that group,” Bateman told League Express.

“In Canberra I had to grow up a bit and I took on a leadership role there, which I’d love to have here too.

“It’s totally up to Adrian Lam, but there are some lads here who are Wigan through and through. Liam Farrell, Sam Powell, Tommy Leuluai and Willie Isa are all passionate lads and will want it too, but I want to a part of that group.”

Bateman’s return to Super League has been well documented, with a desire to be closer to his family the main motivation behind his return.

However, he’s also eager to get back to grips with the competition itself, which he has missed while he’s been in the NRL.

“I’ve watched the derby games from afar and, just watching it, I’ve been screaming at the TV getting into it. It’s the little stuff; I’ve missed having my family watching me, to be fair. It’s the passion of the fans. I love the fans over here; I’m not saying they weren’t great in Oz, but here you have 15,000 people pissed up! It’s great.

“Someone asked me a question over there about dreaming about the NRL and it never was the case, it was always about Super League for me and my brother, playing in big games.

“What I watched on TV is Super League every week. I grew up watching Bradford. I think they were surprised by my answer, but it’s true.

“And it’s a great competition when I signed my deal to come back and it’s in a strong place right now. I wish it was March already, to be fair, because I want to get back playing.”

When he does return to the field, Bateman knows he comes back with a target on his back. And he can’t wait to for opposition players to have a crack at him.

“I know for a fact that if I was a kid in their position, I would think the exact same thing. To prove a point, that’s who you go for, I’ve been there before. But I’ll be ready, I’ve started training three, four weeks ago. I can’t wait for that and it’s the challenge I want.

“I was on the other side; you have those moments in time when someone is in front of you. Everyone mentions the Jamie Peacock one, but there were moments before that, it was only because it was him that people made a thing of it.”

The Warriors revealed their new squad numbers on Friday, with Bateman’s capture of the 13 shirt the headline story.

Joe Bullock’s form saw him promoted to number 10, with marquee forward George Burgess losing the shirt and instead wearing 16.

New signing Jai Field will take the number 6 jersey previously worn by Bevan French, who will wear number 1. Zak Hardaker will wear 3 while Brad Singleton has been given the number 8 shirt.