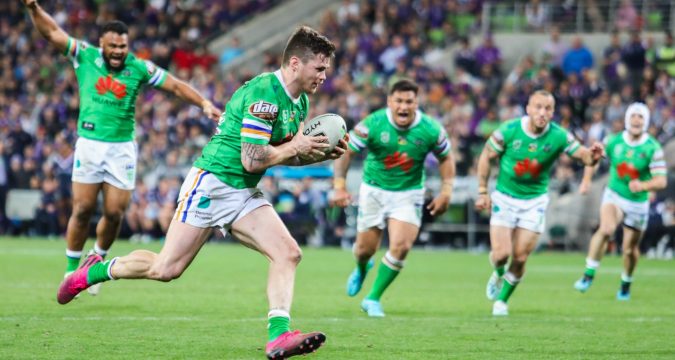 So fair play to John Bateman for pulling the plug on his time at Canberra Raiders to return to Wigan so he can be closer to his loved ones, in particular his daughter.

It can’t have been an easy decision, and it will have come at a cost, both financially and professionally, because the NRL is the best, most intense and most testing competition in the world, and he is now taking himself out of it.

John had a fantastic first season Down Under last time around, helping Ricky Stuart’s side reach the Grand Final and winning the Dally M second row of the year award.

It was great to see another English player go to Australia and more than hold his own.

It’s a huge shame he has picked up that troublesome shoulder problem, and hopefully he will regain fitness in time to play some part for the Raiders this year.

There’s that phrase ‘second-season syndrome’, and I’d like John to show that last year’s superb contribution to the Canberra cause was no flash in the pan, and that those two operations haven’t taken their toll.

Then it will be back to Wigan, where he built his reputation over five seasons after emerging as a real talent at Bradford, and twice won the Super League title.

To have got him on a four-year contract is a great bit of business and a statement of intent.

At 26, John has plenty of years left in him, and his presence will obviously enhance the squad as the Cherry and Whites bid to match fellow heavyweights St Helens, Warrington and Leeds as the game tries to find a way forward after the impact of the coronavirus crisis.

There are clearly tricky times ahead, and it’s been a worry to hear both Adam Pearson at Hull, and Neil Hudgell at Hull KR, underline just how precarious a position those two Rugby League institutions are in.

No club is shielded from the effects of the pandemic.

Both Wigan, who last week watched their footballing neighbours go into administration, and Warrington have confirmed significant financial injections from board members, and these won’t be the only cases.

There are also the renegotiated lower TV payments from Sky to factor in, and as has been widely discussed, the new broadcast deal to run from 2022 is going to be so important to the future shape of our game.

Clubs will have had to redraw recruitment budgets. Many players have had their pay levels cut and when negotiating new deals, will have to accept lower figures than the ones they would have hoped for.

That adds an extra and challenging dimension to such high-profile signings as John Bateman by Wigan and Greg Inglis by Warrington.

They clearly won’t have come cheap, and the players already there wouldn’t be human if they weren’t comparing their own financial packages with those of the new arrivals.

Some clever man-management could well be called for at both the DW and Halliwell Jones Stadium.

Meanwhile, the release of Kyle Eastmond by Leicester Tigers following his failure to agree a revamped pay deal with the rugby union club has inevitably led to talk of a return to Rugby League for the former St Helens back.