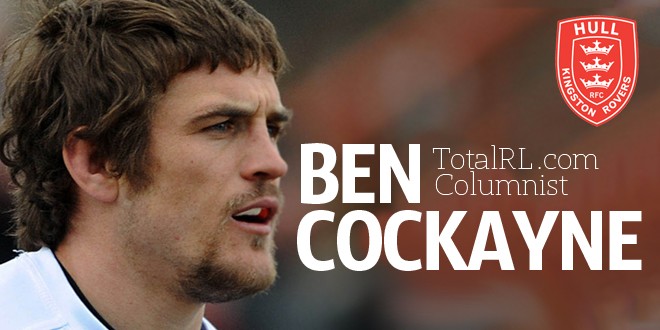 Hull KR winger Ben Cockayne, 30, has joined the Total Rugby League team as a columnist. Check back every Wednesday to read his thoughts on the game’s hot topics…

It feels like a breath of fresh air being back in east Hull. There’s been a hell of a lot of changes since I was last at Hull KR, I can definitely tell I’ve been away. The club seems to have stepped up to that next level in terms of professionalism, set-up, the facilities, the new stand, everything has been stepped up a notch.
I feel like I’ve come back to a much improved club, but in terms of the start we’ve had to the season, it hasn’t been the best. We need to get our fingers out now and start putting some performances in. Injuries are no excuse, we’ve got a really good, solid squad this year with a lot of strength in depth. Injuries play a part in this game of ours and that’s why we’ve built a squad like we have. We’re just not quite firing on all cylinders at the moment. I’m confident that will come, though – we have too many good players for that not to change.

So close but yet so far

We started poorly against St Helens last week, we were under the pump and ended up 12-0 down early on. We managed to pull ourselves together for the last 20 minutes of the first half, though, and got it to 12-12 at half-time. We felt like we were on top going into the interval, but when we came back out we were instantly on the back foot. A couple of poor decisions was all it took and next thing we know we’ve played the ball three times in 22 minutes. It doesn’t matter who you’re playing, never mind St Helens, you just can’t afford to do that at this level.
I think if we can put a full 80 minutes together we are going to be a dangerous team, but at the moment we’re struggling to do that. It will come, though, I’m sure of it.

I understand St Helens prop Alex Walmsley is also a columnist for this website. I tweeted not so long back that I thought Alex should be considered for the England team. Having played against him last week, I am more convinced than ever. We purposefully avoided him with our kick-offs because he’s that big and strong. It doesn’t matter if you put three or four men in the tackle, he’s going to be a real handful. I stick by what I said, they’ve got to be looking at him now. We are four games in and he’s been the stand-out front rower from what I’ve seen on TV and what I’ve played against. He’s been the best by a country mile if you ask me. He’s only been in Super League 18 months and he’s tearing it to pieces, which is fantastic to see. I hope he really does well.

Getting the balance right

Away from Rugby League, I am involved with a nutrition business. I was given the opportunity to work with Herbalife back in January 2012 but I knocked it back because I’d just started with Wakefield and wanted to focus on them. The timing wasn’t quite right, but once I got settled in the opportunity came again and I got on board. I’m an independent distributor for them. I started using the products myself and was really impressed – I found it easier to get out of bed on a morning and my performance on the field improved. In fact, towards the back end of 2012 and throughout 2013 was probably my best form to date so I kind of got sucked in by the products. I then realised it could be run as a business. I help people achieve their health and wellness goals, whether it’s weight loss, weight gain, or just improving nutrition. From then on I started offering people the opportunity I was given and it’s grown from there.It’s given me a massive focus away from rugby. Don’t get me wrong, being a player is fantastic, but if you don’t have a focus away from it, you can get into the wrong things. I’m a prime example, I used to go do things I shouldn’t have been doing and got myself in all kinds of strife. Whereas now I have got a focus and it’s something I am 100 per cent passionate about. It lets me switch off from Rugby League.When I come home I’ve got a separate focus, I’m not coming home thinking I’ve had a bad day at training or a good day at training, a bad game, a good game, I can totally switch off, enjoy my part-time business, and when it comes back to training my head’s back on and I’m back into the rugby. At the moment I’ve just got a great balance in my life in terms of work, I’m fortunate to have two jobs I absolutely love. Life is pretty fantastic at the moment. It’s given me a chance to do some positive things away from rugby instead of some stupid things that I tended to do before.

Taking a boot to the face

I cut my face against Huddersfield a couple of weeks ago and damaged my good looks. Leroy Cudjoe got a ball away to Jermaine McGillvary and he went down the touch line so I dived for his legs, tackled him, and got a boot in the face at the same time. I knew straight away, you just feel it getting warm in that area and then the blood started dripping so I had to go inside and get stitched up, come back out patched up and crack on from there.We played Castleford the week after and I knocked the stitches out and it came open again, so it’s been a bit of a nuisance but it’s finally scarring over now. The only trouble is I’ve got a big lump behind it so whenever I get a whack on it it doesn’t half kill.Playing with injury is just one of the things we’ve been brought up doing, I remember as kids whenever you went down the first thing the coach or your parents would say is ‘don’t you start crying’. I suppose we’ve been brought up with some tough love and I think it’s great, I think that’s how everybody should be brought up. We know that our sport is right up there with the fiercest in the world. I would say boxing is probably tops Rugby League in terms of getting bashed up but I can’t think of another game that’s as physical, and little things like a cut on your face are nothing to the injuries you can potentially get.

We won’t take the Warriors lightly

On to this weekend and our trip to the DW Stadium. Wigan obviously lost against Castleford at the weekend so will be wanting to right a few wrongs against us. We’d be foolish to underestimate the reigning double champions. Don’t take nothing away from Castleford, they are completing sets up at 90 per cent and playing fantastic. They are where they are on merit alone and rightly so. We know we are facing a champion team in Wigan and we are going to have to prepare and do our very best. It’s going to be tough for us. Like I’ve said, we haven’t had the best of starts but at some point it is going to click for us and we are going to start causing teams some problems. Hopefully it will be this week but I am not going to get all cocky and clever and say we are going to beat Wigan, that would be a stupid thing to say. We all know what Wigan are capable of and it’s going to be a massive task for us this weekend.

I’m looking forward to playing with Ade Gardner now he’s joined us on loan. He’s got plenty of experience and it’s just unfortunate for him that at the minute St Helens have got two fantastic young prospects in Tom Makinson and Adam Swift, who are carving it up every week and doing a fair bit of damage. He’s just not been able to get in that side and I dare say a lot of wingers in Super League would struggle to get in that side. It’s great for us because Ade has all the experience. He’s tough as nails, one of those blokes who will carry the ball as hard as he can every single time. He’s played internationally at the highest level and he’ll be a fantastic signing for us. Hopefully he will get on a good run and do us proud.

I’d say Leeds have the best back line in the Super League right now. They’ve got the X Factor this year, I think. If you can leave a bloke like Ben Jones-Bishop out of your team then you must be blessed with some serious quality, which Leeds obviously are. Zak Hardaker, brilliant young talent, Tom Briscoe and Ryan Hall on the wings, two internationals, Kallum Watkins – best centre in this country as far as I’m concerned, and Joel Moon not too far behind him. If you ask me, that is the most devastating back line running around in Super League at the moment.

Wakefield can make the play-offs

I was chuffed to see Wakefield doing well and getting off the mark against Catalans last week. Me and Rich Agar have had a fantastic relationship – he was the bloke that resurrected my career basically so I’ve got nothing but good words to say about them. I’m really happy they’re doing well.
The win against the Dragons was awesome and I think they’re only going to get stronger now. They could be challenging that top eight without a doubt.

Find out more about Ben’s nutritional work by visiting www.bencockayne.hblf.net