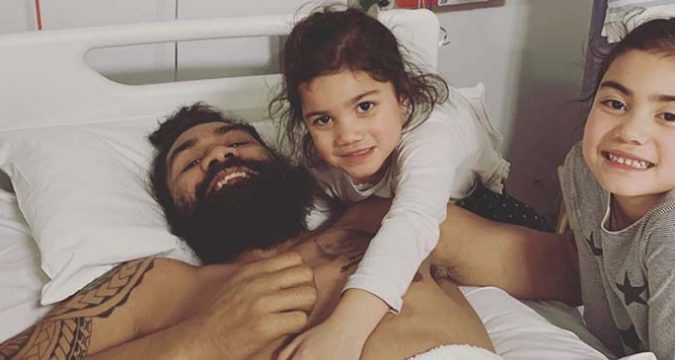 The RFL Benevolent Fund has assured Mose Masoe that it will make a “lifelong commitment” to the Hull KR forward after it helped ensure he could remain in hospital to continue his rehabilitation from his career-ending spinal injury.

Masoe had been told that because of the demand for beds amidst the spread of the coronavirus, he would have to leave Pinderfields Hospital in Wakefield ahead of schedule, just three months on from the injury, when it was initially feared that he would be paralysed from the shoulders down.

He has since made remarkable progress, and is now walking with the assistance of crutches. And crucially, with support from the Benevolent Fund, who offer assistance for players and their families affected by life-changing injuries, he will now remain in hospital.

“We were part of a group that insisted it was absolutely wrong to send him home,” Steve Ball, the fund’s general manager, told League Express.

“It’s so important that people like him continue to get physiotherapy so his rehab stays well and truly on track.

“That would be impossible at home, with the current social distancing guidelines. At hospital, people can put equipment on and work with him, so he wouldn’t be getting anywhere near the same level of care at home. He’s made incredible progress, and thankfully the spinal unit was able to remain as it is, despite everything that’s happening, meaning that Mose can stay.”

Ball hopes that Masoe will now be able to complete his whole rehabilitation programme in Pinderfields as planned. But the Benevolent Fund has tried to ensure he could do as much as possible at home if the time comes for him to leave hospital.

“We put a stair lift in at his home and gave some money for handles to be put in around his home, and the occupational therapists were in touch with his family,” Ball revealed.

“But we are certainly hoping he can stay in hospital now. They tell us it’s understandably under review, but it’s important for people like Mose that we ensure he gets the capacity and treatment he needs.”

Ball also admits he was blown away by the drive and spirit of Masoe, as well as the remarkable progress he has made.

“These injuries can be literally millimetres over whether you can move a limb ever again, but it appears that some of the deep bruising that has been associated with this injury is coming out,” he said.

“We won’t know the full extent yet – that will take a year – but the more physio he’s done, he’s improving. The nurses at Pinderfields tell me that the best patients they have are sportsmen and military personnel, because they have the determined mind to follow everything that has been asked of them. Mose enjoys the endurance side of it.

“When I saw him laid prone in his bed for the first time, I held his hand and told him we would become best friends and we would support him.

“We offered for his family members to come from Australia and Samoa and we’ve done other stuff for him, like getting him an iPad because his wife is self-isolating due to the fact she’s six months pregnant. We pay for whatever we can and it’s a lifelong commitment while he’s in this country.

“We’re not a wealthy sport, but we are certainly rich in our values.”