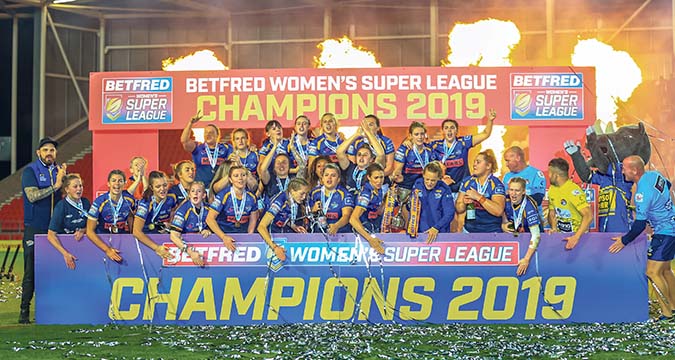 The Betfred Women’s Super League returns on Sunday 18 April and the RFL, in association with In Touch productions, will show one live game each week via Twitch.

In the opening round of fixtures, reigning champions Leeds Rhinos entertain York City Knights as part of a double-header featuring a local derby between Castleford Tigers and Featherstone Rovers. Both games will take place behind closed doors at Sport Park Weetwood, Leeds, whilst at Warrington’s Victoria Park the Wolves take on Wigan Warriors and Bradford Bulls will play St Helens in the other Round 1 fixtures.

Warrington Wolves are one of the newcomers to the expanded, 10-club competition, the other being Huddersfield Giants who will make their Betfred Women’s Super League bow against the Wolves a fortnight later in Round 2.

The repeat of the 2019 Grand Final between Castleford and Leeds is scheduled for Sunday June 13, when there will be another derby across the Pennines as St Helens face Wigan.

There will be 10 rounds of fixtures during the regular season, with clubs playing each other once before the top four break away to take part in a play-off series with a Grand Final place at stake. The remaining six teams will compete for places in the final of the Betfred Women’s Super League Shield, with both finals taking place at the Emerald Headingley Stadium on Sunday 10 October.

Thomas Brindle, Betfred Women’s Super League General Manager, says: “During the last week we have unveiled the National Lottery as a new commercial partner to the RFL and in particular Women’s and Girls’ Rugby League, we’ve published a new report demonstrating the significant social impacts of Women’s and Girls’ Rugby League – These Girls Can – and we’ve announced that October’s Grand Final will be broadcast live on Sky Sports.

“Now, I’m pleased to announce that via Twitch we’ll be showing live action from the Betfred Women’s Super League every week of the regular season, with match coverage repeated later the same week on Our League. We had a really encouraging response when we showed some games on Twitch in 2019 – it takes us to a new, younger audience, with 15m daily active users and 76% of viewers aged 18-49.”

The full fixtures for the regular season are as follows.