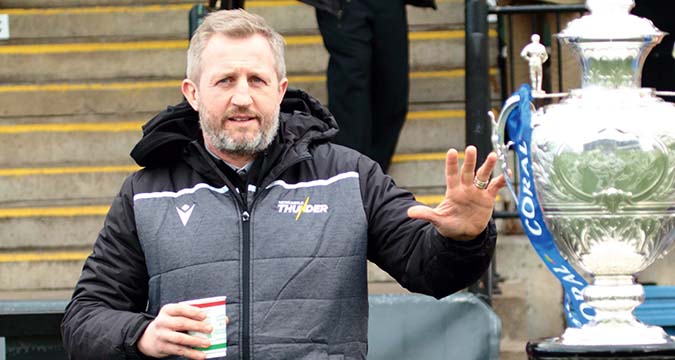 Newcastle Thunder Director of Rugby Denis Betts was delighted with the news last Thursday, that Thunder were the club selected out of five applicants to be promoted to the Championship from League 1 for the 2021 season.

Thunder were chosen ahead of Barrow, Doncaster, Rochdale and Workington and Betts is confident the right decision has been made.

“I felt we had a really strong case,” he said.

“The other clubs forwarded their cases and put strong bids in place about what they can give to the game.

“But to come back to us, I felt we’d done enough with our recruitment at the start of the year to be pretty confident that we could get promoted and this keeps us on course with where we want to be.

“The whole process made us realise how much work has been done, how much still needs to be done and how strong a Rugby League area this is.

“When you look across the community game and how well the clubs and sport is promoted, people love Rugby League in the northeast.

“It’s an exciting prospect but we know we need to get better as well.

“We want those amateur clubs to get stronger, have more players and develop coaches so they help their players get better.

“This isn’t an expansion area – it’s a development area.

“Rugby League has been here a long time, long before Gateshead Thunder came into the mix in Super League.

“It’s an exciting year for the region next year with World Cup matches and Magic Weekend, and there are some really positive things happening here.”

The decision to award the Championship place to Newcastle, combined with the decision today (Monday) on which club will replace Toronto Wolfpack in Super League, is a reminder of the licensing system that lasted six years in Rugby League, between 2009 and 2014. Betts is a firm believer that the licence system should return permanently.

He said: “We need to be mindful and understand how the game needs to grow.

“It takes time for any club going into Super League, and this time they will need to be very lucky and spend well in a market place that has already been attacked and eaten up.

“I’m a big advocate of sustained growth and the licensing process.

“If you hit the criteria, are able to fulfil the business needs and have the ability to show that people in your region are playing the game, then you need the ability to grow.

“It doesn’t matter if there are ten, twelve or 14 teams in the top competition if everyone fulfils the criteria.

“You might at first have to split the TV money more ways, but the money will get better as the competition grows.

“We have a great example in Rugby League with the NRL, which has no promotion or relegation, but still has supporting leagues that are regionalised.

“You can be the worst team in the competition but know you’re able to plan for next year, blood some juniors and try and be a real solid contender two years down the line.

“Here, every promoted team is relying on the whim of an owner to spend a lot of money and try and stay up.

“There was nothing wrong with the licensing system – it didn’t fail last time, it was the application of it that failed; it wasn’t put in place properly.”