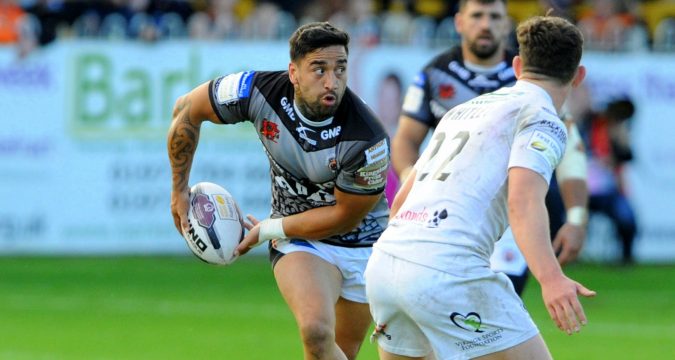 Denis Betts has revealed how he tried to sign Rangi Chase years ago, after securing his services for the rest of the current campaign.

But Betts revealed that it wasn’t the first time he had tried to lure the England international to the Vikings, either this year or previously.

“I spoke to Rangi a number of years ago before he moved to Salford,” Betts revealed.

“The halfback situation especially through the pre-season and at the start of the year with not having our half who was sat in there regularly.

“But Rangi was playing a big part of what was happening at the time even though he was on the outskirts as Ben Roberts was getting in ahead of him, but he still had a big role to play there.

“Things have changed, we’ve become a little bit more desperate now, and that’s not saying it’s a desperate act, I think it is a really positive move for us to get a player of his quality and an England international, it’s not very often you can get an England international in on half loans and bring in a player who can open things up like Rangi can. He comes here, he’s got a clean slate and he wants to go again.”

Although Chase is out of contract at the end of the season, Betts refused to look beyond the end of the current campaign, with Widnes looking set to fight for Super League survival.

“That will take care of itself, we have the present to look after at the moment and not just getting a team on the field, but one that can compete.

“He’s exciting. I think that’s what supporters and Rugby League fans see and that’s what Rangi can do and not a lot of people can.

“He can put on a pass other people in the game can’t. He’s got a lot of structure to his game, that’s one of the things he can do that he’s added to his game, but what he can do which is hard to coach into somebody is he can break open a game and put a kick or a pass in to make a try.

“I’ve spoken to Rangi and he’s looking forward to playing and getting regularly on the field. He’ll play this week, he’ll be in the starting team.”

In further good news for Widnes, both Joe Mellor and Aaron Heremaia look set to be fit for the Magic Weekend clash with Wakefield, although Patrick Ah Van will miss out after it was confirmed he will be out for the rest of the year with a snapped Achilles.

“He’s been outstanding. The thing with Pat is you know when he plays you’ll get some quality out of him. He showed that with a few tries against Hull and he’s athletic enough to score tries not many could. I feel for Pat as much as I feel for myself and the team at the moment too.”