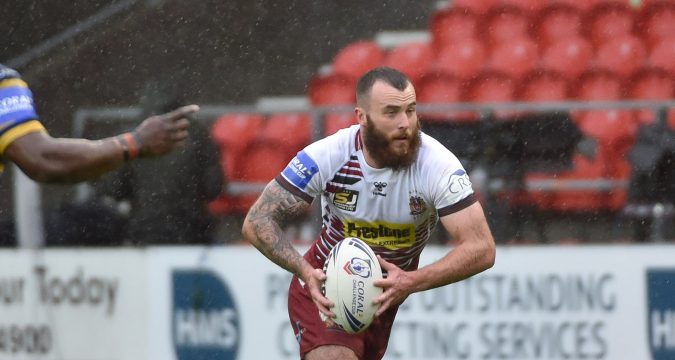 Wigan Warriors winger Jake Bibby followed up his two-try performance for Wigan against Leigh in the opening round of Super League XXVI by going one better against Wakefield tonight, scoring a second-half hat trick to secure victory for his side while ensuring that he has overtaken Hull KR’s Ryan Hall at the top of he tryscoring chart.

It was the proverbial game of two halves, with the scores tied 6-6 in the first half as defences were dominant, with Wakefield’s David Fifita opening the scores when he took a posse of Wigan defenders over the line with him. But Wigan replied through Oliver Partington, who took a pass at first receiver from Sam Powell to crash over.

Sadly, Wakefield’s star winger Tom Johnstone had to leave the field early for a head injury assessment, which he failed, after what looked like a dubious tackle from Willie Isa.

Wigan came out for the second half determined to assert their dominance, and they were soon in the lead when Bibby went over from his first from smart centre play by Isa, before Hardaker superbly supported a fine break by Liam Farrell to make the score 18 6 with his three conversions.

Safely in the lead, Wigan opted to spread the ball to increase the pressure on their opponents and a beautiful passing movement created a superb second try for Bibby, before John Bateman scored his first try of the season from close range to make it 30-6.

It remained for Bibby to wrap up his hat-trick against a tiring Wakefield in what was clearly Wigan’s best 40 minutes of the season.

A full report and photos from thig game will feature in Monday’s League Express. To subscribe, go here.