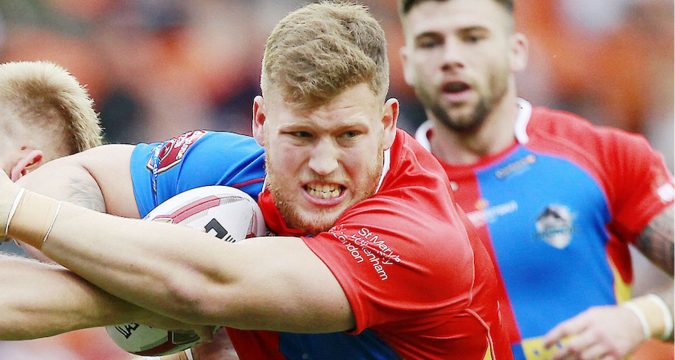 Lewis Bienek believes the developmental pathways for aspiring players in London are being overlooked outside the capital.

The likes of Dan Sarginson, Tony Clubb and Mike McMeeken are just a small number of Super League’s London-born stars, while the London Broncos’ stunning start to the season has centred around players from the club’s academy system.

Bienek, who will remain on loan at the Broncos for the rest of the season, believes the game could learn a lot from the systems in place down south for young talent.

“There are loads of players kicking through and it’s a credit to what we’re doing down south, what we can achieve and what we bring to the table.

“I think sometimes London gets overlooked and I feel if people came and had a look it would shock people at how much is going on.”

London-born, Bienek had an unconventional route in into the 13-man code, but admitted he would love nothing more than to help the Broncos gain promotion back to the sport’s top flight following their help in his development.

“When I was younger I played rugby union when I started at secondary school,” he explained.

“It wasn’t until one of my mates told me to go down and try Rugby League for a bit of fitness when the season was down. I just picked it up well and enjoyed it more. We have a good youth system in the South, we have play development centres, that kicks on to Origin games and then getting London scholarships. I did that for two years, then the Academy and first team. It was a really good opportunity for me picking up the sport.

“The Broncos deserve all the credit. I wouldn’t be the player I am without the time all the different coaches have put into me from scholarship all the way up.

“Going into this season there were loads of doubters saying we’d achieve nothing and finish tenth, and I think that’s because we didn’t sign big players, but that’s done us a lot of good because we’ve gelled really well together and played with each other for several years.

“Promotion has been the goal and it would be the biggest thing in my career so far. It would be indescribable.”