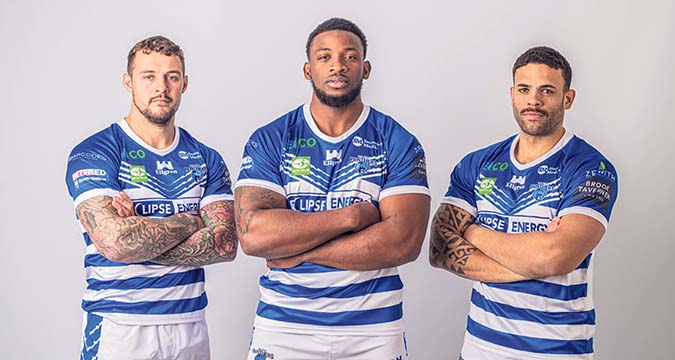 Rugby League’s latest 2020 rebrand was unveiled last week and it was its boldest yet.

Wigan and Salford’s decision to change their club badges in recent weeks had been greeted with strong reactions from both sets of supporters.

But on Wednesday night Halifax went one step further by adding ‘Panthers’ to their title in a bid to take the club forward into a new era.

Fax had been one of the few clubs in the sport operating without a moniker.

For seven years from the Super League dawn of 1996, the club infamously had ‘Blue Sox’ in its title, which was never fully accepted by supporters.

Now, after a lengthy planning process, the club has gone with Panthers – a not unique Rugby League nickname, given the big cats of past and present in Penrith, Prescot, Blackpool and Chorley.

Fax adopted its new suffix after extensive research, which I witnessed first hand, having been invited to attend a virtual board meeting earlier this year when the plans were laid out.

The ‘story’ was picked up by local press in the lead-up to last week’s announcement and provoked an excited reaction from locals, before later being picked up by national outlets.

The value of that coverage is difficult to gauge, but at least people were talking about Halifax, which the club has found difficult to achieve during a slide in attendances over the last two decades.

But how important are monikers in modern sport?

Some remain sceptical. I remember listening to Jon Wilkin on a 5Live podcast questioning Rugby League’s obsession with new nicknames.

In the past I might have held a similar view, but that was before having children.

During lockdown this year my five year old son Leo became almost obsessive about the NRL when eight games a week were shown on TV, lapping up team and player names like a sponge.

And it wasn’t Brisbane, Canterbury and Penrith he would talk about – it was the Broncos, the Bulldogs and, of course, the Panthers.

It’s a simple way into the sport for the youngest of supporters, and that is at the heart of Halifax’s move.

Fax director Dave Grayson explained: “It’s about looking at where the club’s at, the demographics of our fan base, and age-wise a significant chunk are 50-plus in terms, and we need to attract a new audience.

“I think we’ve probably missed a generation, but what we’re trying to do with the Panthers is attract a whole new generation of people, and even capture some of those lapsed fans who were with us once but have disappeared now, to see if we can get them back.”

It’s fair to say the initial reaction has been mixed, although dipping into the jungle of social media, it’s perhaps more positive overall than was the case in other recent rebrands.

Time will tell, of course, but the Panthers’ media and marketing director Lee Kenny, who has been a key figure in the move, believes it is a “necessary step”.

Kenny explained: “As a club, we fully understand the fans’ fondness for the old coat of arms, which is naturally representative of our town.

“But the new Panthers brand provides a fantastic platform from which we can launch our vision of bringing the glory days back to The Shay.

“Halifax is one of the most famous names in the sport and the club is a huge focal point of our region, but it’s now more than 30 years since our last major trophy and as a business we simply cannot afford to stand still.

“The new moniker, logo and wider brand will open up many new opportunities for marketing and engagement that simply weren’t there under our old identity.

“We are confident that our fans, sponsors and other stakeholders will embrace this as a positive and significant day in the club’s 147-year history.”